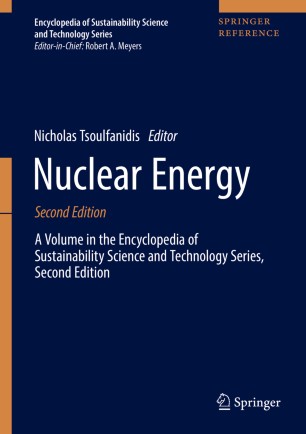 A Volume in the Encyclopedia of Sustainability Science and Technology Series, Second Edition

This book provides an authoritative reference on all aspects of the nuclear energy enterprise for both fission and fusion reactors. Featuring 22 peer-reviewed chapters by recognized authorities in the field, the book offers concise yet comprehensive coverage of fundamentals, current areas of research, and goals for the future. Topics range from fundamental reactor physics calculations, reactor design, nuclear fuel resources, and the nuclear fuel cycle, to radiation detection and protection and the economics of nuclear power. All chapters have been updated from the first edition, with new chapters added on small modular reactors, medical applications - atomic and nuclear, an

d applications of radioisotopes. As each chapter is written by an acknowledged expert in the area, the reader can be assured that the text is accurate, up-to-date, and will appeal to a broad audience of undergraduate and graduate students, researchers, and energy industry experts.

Dr. Nicholas Tsoulfanidis spent most of his professional career at the University of Missouri-Rolla, now Missouri University of Science & Technology, having served as a faculty member, Chairman of the Department, Interim Vice Chancellor for academic Affairs, and Associate Dean of the School of Mines and Metallurgy for Graduate Studies and Research. In addition to his teaching and administrative duties he performed research in the areas of radiation transport, radiation protection/health physics, and the Nuclear Fuel Cycle. He has written numerous technical papers and two textbooks: “Measurement and Detection of Radiation," co-authored by Dr. S. Landsberger, now in its 4th Edition, and “The Nuclear Fuel cycle" 3rd Edition (2013).

He has received many awards, the most prominent being the Glenn Murphy Award (1995) given by the American Society for Engineering Education [ASEE] for “Outstanding contributions in the profession and teaching of Nuclear Engineering,” the Ted Rockwell Award, Radiation Protection & Shielding Division (2010), and the Arthur H. Compton Award (ANS, 2013). He is a Fellow of ANS.During the period 1997-2015, he served as Editor of Nuclear Technology, an international technical Journal published by the American Nuclear Society. At present he is an Adjunct Professor in the Department of Chemical and Materials Eng. at the University of Nevada-Reno, where he teaches nuclear-related courses in the Nuclear Materials Emphasis program.