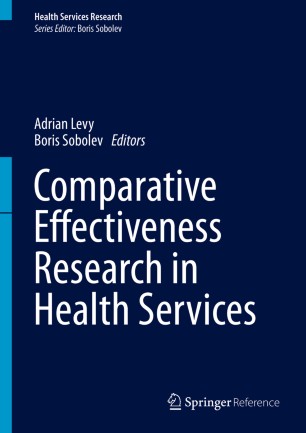 The second volume in the Health Services Research series provides a series of perspectives on comparative effectiveness research. Motivated by concern from the general public, governments in virtually all countries with developed and rapidly developing economies have been actively seeking and promoting ways of improving the patient experience of health care, improving the health of populations, and reducing the per capita cost of health care. While comparing treatment outcomes is not a new concept, appreciation of its potential application has grown in recent years. In addition to traditional health sciences methods, modern approaches to comparative effectiveness research now include greater emphasis on social sciences frameworks such as economics, ethics, and implementation science. Moreover, a key feature of the modern approach to comparing treatment outcomes is a focus on the individual patient through explicit consideration of inter-patient variability and patient-reported outcomes.
Comparative Effectiveness Research presents a series of chapters of relevance including introductions to areas that are being incorporated when comparing treatments, country-specific applications, patient-centred approaches, and modern methods. Included are chapters on the following areas that are being considered in treatment comparisons: ethics, economics and costs, implementation science, modern payment schemes (coverage with evidence development), and priority setting. Country-specific examples include an overview chapter on national approaches from various countries in Europe, Australia, and Canada, as well as specific chapters on comparative effectiveness research in Brazil and in the United States. The focus on the individual patient is described through chapters on patient-centred comparative effectiveness research, individualized treatment, the link with personalized medicine, and incorporating patient and public input for treatment. Methodological chapters include overviews of data sources, study designs, new statistical methods of combining results, the link with evidence-based medicine, specific issues when comparing drug and non-drug technologies, and dissemination of results.