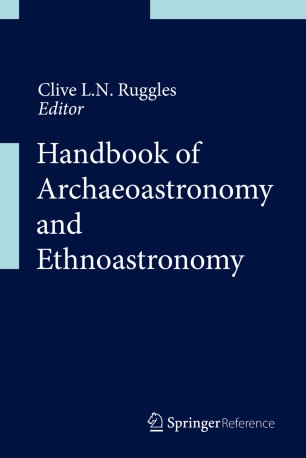 Handbook of Archaeoastronomy and Ethnoastronomy

How human communities interpret what they perceive in the sky is vital in fulfilling humankind’s most basic need to comprehend the universe it inhabits, both from a modern scientific perspective and from countless other cultural standpoints, extending right back to early prehistory. Archaeoastronomy, which is concerned with cultural perceptions and understandings of astronomical phenomena, is a rich cross-disciplinary field.

The central aim of “Handbook of Archaeoastronomy” is to provide a reliable source for theory, method, interpretation and best practices that will give a definitive picture of the state of the art research in this field for serious scholars regardless of the discipline(s) in which they are qualified. It will be equally suitable for those already contributing to the field and those interested in entering it. Also included are studies in ethnoastronomy, which is concerned with contemporary practices related to astronomy, particularly among modern indigenous societies.

A major part of this MRW is comprised of a set of wide-ranging archaeoastronomical case studies both geographically and through time, stretching right back to Palaeolithic days, and also in terms of the types of human society and nature of their astronomical ideas and practices. However, these are chosen in order to best illuminate broader issues and themes, rather than to attempt, for example, to provide systematic coverage of recent ‘discoveries.’

Thematic articles cover general themes such as cosmologies, calendars, navigation, orientations and alignments, and ancient perceptions of space and time. They also highlight various aspects of the social context of astronomy (its relationship to social power, warfare, etc) and how we interpret astronomical practices within the framework of conceptual approaches. There are also discussions of broad issues such as ethnocentrism, nationalism, and astronomical dating. The “methods and practices” articles cover topics from field methodology and survey procedures to social theory, as well as providing broad definitions and explanations of key concepts. We are also including a number of “disciplinary perspectives” on approaches to archaeoastronomy written by leading figures in the constituent fields. These articles cover material that, generally speaking, would be familiar to graduates in the relevant discipline but, critically, not so to those with different backgrounds.