Encyclopedia of Paleoclimatology and Ancient Environments 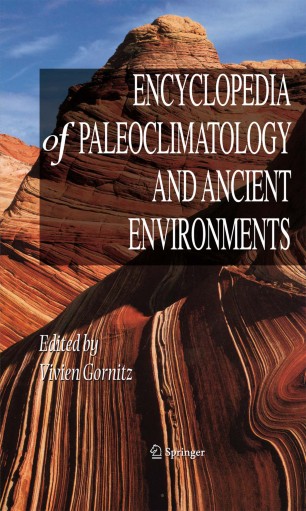 Concern exists over human-generated increases in atmospheric greenhouse gases and their potential consequences to society. The Intergovernmental Panel on Climate Change (IPCC) in 2007 finds that global temperatures have increased by 0.8ºC since 1850 and that climate warming is now 'unequivocal'. While the human imprint is becoming increasingly apparent, Earth’s climate has shifted dramatically and frequently during the last few million years, alternating between ice ages, when vast glaciers covered Northern Europe and much of North America, and interglacials—warm periods much like today. Farther back in geologic time, climates have differed even more from the present. Thus, to fully understand the unusual changes of the 20th century and possible future trends, these must be placed in a longer-term context extending beyond the period of instrumental records.

The Encyclopedia of Paleoclimatology and Ancient Environments, a companion volume to the recently-published Encyclopedia of World Climatology, provides the reader with an entry point to the rapidly expanding field of paleoclimatology—the study of climates of the past. Highly interdisciplinary in nature, paleoclimatology integrates information from a broad array of disciplines in the geosciences, ranging from stratigraphy, geomorphology, glaciology, paleoecology, paleobotany to geochemistry and geophysics, among others. The encyclopedia offers 230 informative articles written by over 200 well known international experts on numerous subjects, ranging from classical geological evidence to the latest research. The volume is abundantly illustrated with line-drawings, black-white and color photographs. Articles are arranged alphabetically, with extensive bibliographies and cross-references.

Vivien Gornitz is a Senior Research Scientist, Center for Climate Systems Research Columbia University and NASA Goddard Institute for Space Studies. She holds a B.A. from Barnard College and a Ph.D. from Columbia University. Her research interests include global sea level rise--past, present, and future, coastal hazards, climatic implications of land cover transformations, and planetary geology, including Mars. In addition to numerous scientific publications, she has edited Geology of the Planet Mars (Benchmark Papers in Geology, v. 48, Dowden, Hutchinson & Ross, Inc., 1979) and has contributed articles to several of the encyclopedias in the Earth Sciences Series. She was a Contributing Author for the IPCC in 1990, 1995, 2001, and 2007.