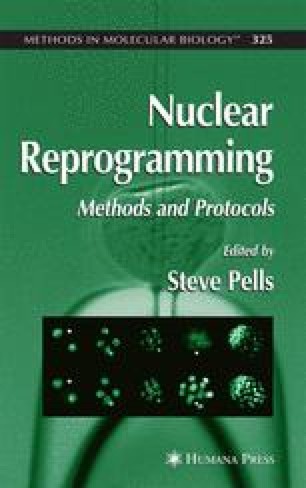 Cell fusion is an approach for combining genetic and epigenetic information between two different types of cells. Electrofusion for generating hybrid cells between mouse embryonic stem cells and somatic cells, which is a type of nonchemically induced and nonvirus-mediated cell fusion, is introduced here as a highly effective, reproducible, and biomedically safe in vitro system. Under optimized electrofusion conditions, cells are aligned and form pearl chains between electrodes in response to AC pulse stimulation, and subsequently adjacent cytoplasmic membranes are fused by DC pulse stimulation. Hybrid cells survive as drug-resistant colonies in selection medium. Cell fusion is a technique that is applied widely in the life sciences. A recent topic of great interest in the field of stem cell research is the successful production of cloned animals via epigenetic reprogramming of somatic nuclei. Interestingly, nuclear reprogramming for conferring pluripotency on somatic nuclei also occurs via cell fusion between pluripotential stem cells and somatic cells. Furthermore, it has been shown that spontaneous cell fusion contributes to generating the intrinsic plasticity of tissue stem cells. Cell fusion technology may make important contributions to the fields of regenerative medicine and epigenetic reprogramming.

Fertilization is one of the well-known cell fusion phenomena occurring in vivo. The union of two pronuclei from an MII oocyte and a sperm creates the next generation and endows it with genetic and epigenetic diversity. Genetically programmed spontaneous cell fusion also is known to occur in the formation of polykaryones, such as myotubes, osteoclasts, and syntrophoblasts in vivo. Remarkably, recent developments in the field of stem cell research have revealed that spontaneous cell fusion plays an important role in maintaining homeostasis of many tissues and organs via degeneration during defined processes of self-renewal and after tissue damage. The capability of spontaneous cell fusion has been shown by the generation of hybrid cells via in vitro co-culturing of mouse bone marrow cells and embryonic stem (ES) cells (1) and of mouse brain cells and ES cells (2,3). The in vivo contribution of spontaneous cell fusion to regeneration of tissues has been proven by the transdifferentiation of bone-marrow-derived hybrid cells into Purkinje neurons, cardiomyocytes, and hepatocytes (4, 5, 6, 7).

A fascinating breakthrough in the area of stem cell research is the successful production of cloned animals via transplantation of committed somatic cell nuclei into enucleated unfertilized oocytes (8). This technique recently has been applied to generate human ES cells derived from cloned blastocysts (9). Nuclear reprogramming from the “somatic type” to the “pluripotential type” is induced by genome-wide epigenetic changes via the activity of trans-acting factors in unfertilized oocytes. Interestingly, using electrofusion between ES cells and adult somatic cells, Tada et al. (10) demonstrated that ES cells have an intrinsic capacity for epigenetic reprogramming of somatic genomes. In hybrid cells between ES cells and thymocytes, nuclear reprogramming of somatic genomes has been shown by (1) the successful contribution of the ES hybrid cells to the normal embryogenesis of chimeric embryos, (2) reactivation of the inactivated X chromosome derived from female thymocytes, (3) reactivation of pluripotential cell-specific genes (Oct4 and Tsix) derived from somatic cells, (4) redifferentiation of a variety of cell types independent of the origin of thymocytes in teratomas, (5) tissue-specific gene expression from the reprogrammed somatic genomes after in vivo and in vitro differentiation, and (6) decondensed chromatin formation in the reprogrammed somatic nuclei as marked by histone-tail modifications of H3 and H4 hyperacetylation and H3 lysine 4 hypermethylation (10, 11, 12, 13). Moreover, embryonic germ (EG) cells derived from gonadal primordial germ cells of mouse E11.5 and 12.5 embryos, in which most parental imprints are erased (14), possess additional potential for inducing the reprogramming of somatic cell-derived parental imprints accompanied by the demethylation of allele-specific DNA methylation in the EG hybrid cells (15). Therefore, electrofusion between pluripotential stem cells and somatic cells will contribute to elucidating the mechanisms of epigenetic reprogramming involved in DNA and chromatin modifications.

The technique of cell fusion pioneered in 1965 by Harris (16) has proven to be a powerful approach for analyzing biological interactions between differentiated cell types and for studying genomic plasticity (17, 18, 19). It has been shown that cell fusion caused by membrane fusion between two different cells is induced by treatment with various chemical agents, such as calcium ions, lyso-lecithin, and polyethylene glycol and also by mediation with viruses such as paramyxoviruses, including Sendai virus (i.e., HVJ), oncornavirus, coronavirus, herpesvirus, and poxvirus. However, chemical and virus-mediated cell fusion has difficulties with respect to the efficiency of inducing cell fusion and also with respect to the reproducibility and biomedical safety when used for clinical applications. Since the 1980s, efforts have been made to optimize many parameters of electrofusion, resulting in the improvement of the fusion efficiency, which is higher than that of cell fusion with polyethylene glycol (20). However, the electrofusion parameters were optimized for making hybridomas for the purpose of stable production of antibodies.

In this chapter, we introduce an experimental procedure to create hybrid cells by electrofusion between pluripotential stem cells and somatic cells. Electrofusion is nonchemically induced and nonvirus-mediated cell fusion that presents many advantages in making hybrid cells: (1) the optimized conditions are reproducible in independent cell fusion experiments, (2) the electrofused cells are biomedically safer than the chemically or virus-induced fused cells, and (3) the microscale production of hybrid cells can be manipulated by using a Microslide chamber under a microscope without possible contamination with other cells. A description of the electrofusion procedure can be subdivided into several sections: (1) The setup of the Electro Cell Manipulator (ECM) 2001 (BTX), AC/DC Pulse Generator with a Microslide chamber; (2) cell culture conditions of ES and fused cells; (3) pretreatment of somatic cells; (4) operation of the electrofusion generator; (5) cell selection of cells after fusion; and (6) the isolation and cloning of fused cells. In the process of electrofusion, an alternative current (AC) induces alignment and compression of the cells, and a direct current (DC) transiently makes reversible pores in cytoplasmic membranes to initiate the process of fusing adjacent cytoplasmic membranes. The alignment voltage, pulse length, and electroporation voltage and number of DC pulses should be precisely controlled. The overall procedures are summarized in Fig. 1 . The following optimized conditions are suitable for electrofusion experiments between ES cells and thymic lymphocytes with the AC/DC pulse generator ECM 2001 (BTX).

For this procedure, a 2.5-mL syringe, 18-gage needle, and 50-mL conical tube are required.

One of the most important requirements for cell fusion experiments is that the culture conditions have to be optimized for maintaining the pluripotential competence and full set of chromosomes (80 chromosomes) derived from mouse ES cells and somatic cells through numerous cell divisions. It is strongly recommended that one identify a satisfactory production lot of FBS that can supply supplements to support effective cell growth without differentiation induction.

The automatic operation switch is used to initiate AC followed by DC. AC is used to induce a nonhomogeneous (or divergent) electric field, resulting in cell alignment and pearl chain formation. DC is used to produce reversible temporary pores in the cytoplasmic membranes. When juxtaposed pores in the physically associated cells reseal, cells have a chance to be hybridized by cytoplasmic membrane fusion. AC application after the DC pulse induces compression of the cells, which helps the process of fusion between the cell membranes.

3.3 Isolation and Cloning of Hybrid Cells

We describe two independent chemical selection systems to select for hybrid cells between ES cells and somatic cells. Normal ES cells are hybridized with thymocytes containing the bacterial neomycin resistance (neo r) gene (10,15). Thymocytes are derived from ROSA26 transgenic mice, which carry the ubiquitously expressed neo/lacZ transgene (21). Only ES-thymocyte hybrid cells can survive and grow in ES medium supplemented with the protein synthesis inhibitor G418. In this case, the ES hybrid cells and their derivatives are visualized by positive reaction with X-gal through β-galactosidase activity, which allows us to analyze their contribution to the development of chimeric embryos and tissues (10,11,15). In another selection system, male ES cells deficient for the Hprt gene on the X chromosome have been used for selecting hybrids with wild-type somatic cells. Electrofusion-treated cells are cultured in ES medium supplemented with HAT. The HAT medium is fatal to the Hprt-deficient ES cells, whereas ES hybrid cells, which are rescued by the thymocyte-derived wild-type Hprt gene, are able to survive and grow (11, 12, 13). In the synthesis of DNA, purine nucleotides can be synthesized by the de novo pathway and recycled by the salvage pathway. Hprt is a purine salvage enzyme responsible for converting the purine degradation product, hypoxanthine, to inosine monophosphate, a precursor of ATP and GTP. In the presence of aminopterin, the de novo pathway is inhibited and only the salvage pathway functions. Consequently, dysfunction of Hprt induces cell death in culture with the HAT medium.