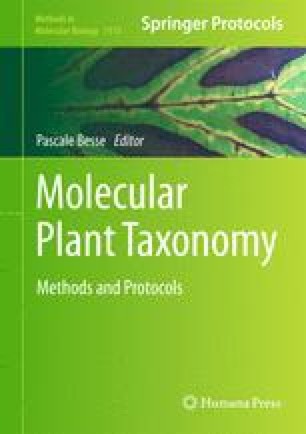 On the Relevance of Molecular Tools for Taxonomic Revision in Malvales, Malvaceae s.l., and Dombeyoideae

In this article, we present an overview of changes to the taxonomy of Malvales. In traditional classifications, this order was variously circumscribed as including four main families (i.e., Malvaceae, Bombacaceae, Sterculiaceae, and Tiliaceae, also known now as “Core Malvales”), but major disagreements existed between different taxonomic treatments. Contributions from molecular data, new morpho-anatomical data, and progress in methodological approaches have recently led to a new broader concept of this order (namely, “expanded Malvales”). Now, expanded Malvales includes ten families (Neuradaceae, Thymelaeaceae, Sphaerosepalaceae, Bixaceae, Cistaceae, Sarcolaenaceae, Dipterocarpaceae, Cytinaceae, Muntingiaceae, Malvaceae s.l.) distributed among seven monophyletic lineages. All these families were previously considered to have malvalean affinities in some traditional treatments, except the holoparasitic and highly modified Cytinaceae. Although molecular evidence has clarified the Malvales taxonomy, the phylogenetic positions of Sarcolaenaceae, Thymelaeaceae, and Sphaerosepalaceae are still controversial and need new analyses focusing specifically on these families to assess their phylogenetic placement and their morphological evolution.

In a phylogenetic context, molecular data combined with recent examination of morphological characters supported the hypothesis of a common origin of “core Malvales.” However, these analyses also showed that the former families but Malvaceae s.s. were paraphyletic or polyphyletic. As a consequence, recent taxonomic treatments grouped taxa formerly included in “Core Malvales” in a broader concept of Malvaceae s.l. Additionally, the intrafamilial taxonomy has been deeply modified, and in its present circumscription, Malvaceae includes nine subfamilies (Grewioideae, Byttnerioideae, Sterculioideae, Dombeyoideae, Brownlowioideae, Tilioideae, Bombacoideae, Malvoideae, Helicteroideae) in two main lineages. Phylogenetic studies on subfamilial rearrangements have focused on the relationships between emblematic taxa such as Bombacoideae and Malvoideae (which form together the /Malvatheca lineage). However, our understanding of the phylogenetic relationships among and within taxa of the other subfamilies (e.g., Dombeyoideae, Tilioideae, and Sterculioideae) has not followed at the same pace. Despite recent investigations, the relationships between the subfamilies of Malvaceae s.l. remain controversial. As an example of these taxonomic issues, we review the systematic studies on Dombeyoideae, with special emphasis on taxa endemic to the Mascarene archipelago (Indian Ocean). Recent investigations have shown that several island endemic genera such as Trochetia, Ruizia, and Astiria (endemic to the Mascarenes) are nested within the mega-genus Dombeya. Consequently, the current taxonomy of this genus does not match the phylogeny and should be modified. Therefore, we propose three possible taxonomic schemes as part of an ongoing revision of the Mascarene Dombeyoideae. However, these taxonomic rearrangements should only be made after a broader study of the diversity in Madagascar and adjacent areas. This broader approach shall avoid possibly multiple and contradictory taxonomic revisions of restricted regions if they were each studied in isolation.

This research is included in the BACOMAR Project (http://mahots.univ-reunion.fr/) supported by the University de La Réunion, the Région Réunion, the European Community, and the Ministère Français de la Recherche. Funding from the Open Laboratory of Ecological Restoration and Biodiversity Conservation of Chengdu Institute of Biology, Chinese Academy of Sciences (CAS), to Li-Bing Zhang and a CAS Research Fellowship for International Young Researchers (Grant n°31150110463) provided support to T.L.P. during the writing. We are grateful to Dr. Li-Bing Zhang and Dr. Karen Wilson for their comments on the previous version of the manuscript. We warmly thank David Caron for the illustrations and Pierre Gigord for his moral support.