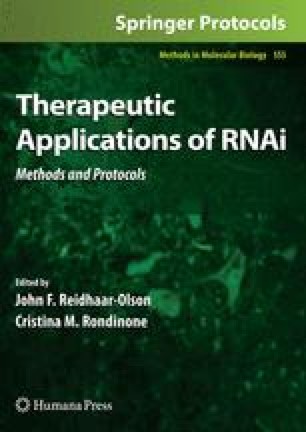 Malaria is a disease that kills more than a million people each year in tropical and subtropical countries. The disease is caused by Plasmodium parasites and is transmitted to humans exclusively by mosquitoes of the genus Anopheles. The lack of functional approaches has hampered study of the biological networks that determine parasite transmission by the insect vector. The recent discovery of RNA interference and its adaptation to mosquitoes is now providing crucial tools for the dissection of vector–parasite interactions and for the analysis of aspects of mosquito biology influencing the vectorial capacity. Two RNAi approaches have been established in mosquitoes: transient gene silencing by direct injection of double-stranded RNA, and stable expression of hairpin RNAs from transgenes integrated in the genome. Here we describe these methods in detail, providing information about their use and limitations.

Human malaria persists today as one of the most widespread and devastating infectious diseases in the world. Plasmodium parasites are transmitted to humans when an infected Anopheles mosquito takes a blood meal. The relationship between the mosquito vector and the malaria parasite is shaped by a complex network of biological interactions determining whether a given mosquito species will be capable of sustaining parasite development. Moreover, the vector competence to transmit disease is also governed by a series of factors intrinsic to mosquito biology, such as host preferences, longevity, immunity, and reproductive rates. However, while efficient genetic methods to study gene function in Plasmodium have long been established (1), functional studies in the mosquito vector are lagging behind, and until recently little was known about the factors influencing Plasmodium development in the Anopheles vector.

Since the recent discovery of RNA interference, the “RNAi revolution” has reshaped the field of functional genomics, allowing characterization of genomes previously recalcitrant to targeted gene manipulation. This revolution has also hit mosquito research. Combined with the availability of the genome sequence of the major malaria vector, Anopheles gambiae, RNAi provides a new tool for malaria research, permitting study of molecules and mechanisms of mosquito biology that are relevant to disease transmission. Here, we describe two approaches for RNAi-based silencing in Anopheles for performing functional analysis in the mosquito vector. Further development of these methods might ultimately lead to new ways of controlling and perhaps even eradicating this devastating disease.

5.2.3 Injection of dsRNA into Adult Mosquitoes

5.2.5 Analysis of Efficiency of RNAi Silencing

In Anopheles mosquitoes, RNAi-mediated silencing can be achieved by two different methods: (a) injecting double-stranded RNA (dsRNA) directly into the body cavity of adult mosquitoes (2) (Fig. 5.1A); and (b) expressing dsRNA in situ from a stably integrated transgene (4, 5) (Fig. 5.1B). The method of choice often depends on the application. Direct injection of dsRNA permits a fast assessment of the function of the target gene at a selected developmental stage, allowing rapid medium-scale screens. The relatively high number of mosquitoes needed for injections and the transient nature of silencing of some genes are among the most common limitations of this method. The generation of transgenic lines expressing stable RNAi transgenes is more labor intensive; however, it provides an inexhaustible supply of mutant mosquitoes for in-depth phenotypical and biochemical analyses, and allows the time and tissue-specific knockdown of the target genes through the use of appropriate promoters.

Direct injection of dsRNA includes several steps: (a) a candidate gene is selected; (b) the optimal target sequence is cloned into an appropriate vector for dsRNA synthesis; (c) dsRNA is injected into adult mosquitoes and the efficiency of gene silencing is examined 1–4 days after injection. In general, the whole process, from the selection of a gene of interest to elucidation of its function in the particular biological process, may be achieved in 1 month. Understandably, establishment of transgenic mosquitoes requires longer periods before any functional tests can be performed. This includes the sometimes delicate cloning into the piggyBac expression vectors; injections of a large number of embryos; efficient crossing methods to obtain a sufficiently large G1 progeny; screening of G1 individuals, normally at the larval stage; identification of positive, transgenic individuals; and the establishment of transgenic lines. Initial functional analysis can be performed with heterozygous lines, provided a screening is carried out to ensure the transgenic origin of the individuals selected for the experiments. In all, it might take 2–3 months from the identification of the gene of interest to the establishment of the transgenic line(s).

5.3.3 Design and Cloning of the RNAi Expression Plasmid

5.3.5 Analysis of Efficiency of RNAi Silencing at the Transcriptional Level

5.3.6 Analysis of Efficiency of RNAi Silencing at the Protein Level

The authors first developed these methodologies while working at the EMBL in the group of Professor Fotis C. Kafatos (dsRNA injections) and in the laboratory of Professor Andrea Crisanti at Imperial College London (transgenesis). They further acknowledge members of the London and Strasbourg laboratories for constructive discussions. This work was supported by grants from CNRS, Inserm, Wellcome Trust, BBSRC, Schlumberger Foundation For Education and Research (FSER), and by the 6th European Commission Programme “Networks of Excellence” BioMalPar. F.C. is a MRC Career Development fellow. E.A.L. is an International Scholar of the Howard Hughes Medical Institute.