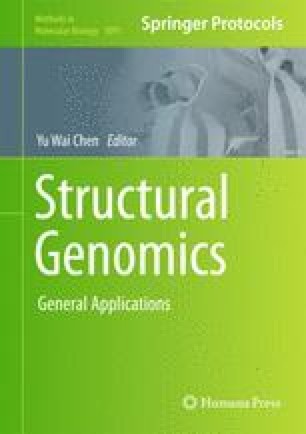 A powerful approach utilizing polyproteins for balancing stoichiometry of recombinant multiprotein complexes overproduced in baculovirus expression vector systems (BEVS) is described. This procedure has been implemented here in the MultiBac system but can also be directly adapted to all commonly used BEVS. The protocol details the design principles of polyprotein-expressing DNA constructs, the generation of composite baculovirus for polyprotein production, and the expression and in vivo processing of polyproteins in baculovirus infected insect cells.

Multiprotein complexes catalyze essential cellular activities. Studying their structure and function is an emerging focus of biological research. In most cases, recombinant production is required for obtaining sufficient amounts of homogenous material for detailed analyses [1]. MultiBac is an advanced expression system that has been designed for overexpressing multiprotein complexes in insect cells infected by a single composite multigene baculovirus. MultiBac has enabled production of many challenging multiprotein complexes, setting the stage to unlock their mechanism [2, 3, 4]. A bottleneck which can be encountered when many heterologous proteins are co-produced from individual expression cassettes derives from imbalanced expression levels of the individual proteins prohibiting proper complex assembly [3, 5]. Some subunits may be expressed stronger, others weaker, and occasionally one subunit is expressed at such a low level that it becomes detrimental to overall yield and a complex containing all desired subunits cannot be obtained.

In order to balance expression levels and achieve properly assembled complexes with correct subunit stoichiometry, we have implemented a novel strategy based on polyproteins that are processed in vivo into individual subunits by a highly specific protease [3, 5] (Fig. 1). This approach derives from the strategy used by certain viruses such as Coronavirus to realize their proteome [6]. To facilitate polyprotein production with the MultiBac BEVS, new transfer plasmids have been created that rely on Tn7 transposon-mediated gene integration into the MultiBac baculovirus (Fig. 2). Other baculoviruses that are in use rely on homologous recombination for composite baculovirus generation (flashBAC from OET, BacVector series from Novagen, others). These baculoviruses can likewise be accessed for polyprotein expression by using the pOmni-PBac plasmid [7].
All polyprotein transfer plasmids contain the same expression cassette which encompasses a very late viral promoter (polyhedrin) followed by the gene encoding for NIa protease from tobacco etch virus (TEV) for subunit liberation, a short oligonucleotide sequence presenting a BstEII and an RsrII restriction endonuclease site, and finally a gene encoding for cyan fluorescent protein (CFP) for direct read-out of polyprotein expression. A TEV NIa protease cleavage site (tcs) is placed upstream of the CFP encoding gene (Fig. 2a). Heterologous genes of interest (GOIs) can be inserted into this polyprotein expression cassette by using the BstEII and RsrII sites and restriction–ligation cloning (see Note 1). Transfer plasmids are then used to integrate the resulting polyprotein expression cassette into baculovirus genomes of choice to generate composite baculovirus for protein expression (Fig. 2b). With this strategy, a number of complexes have been successfully produced with balanced subunit expression levels, including a ~700 kDa physiological core complex of human general transcription factor TFIID [4] (Fig. 3).

Multiprotein complexes can be expressed from a single polyprotein, or alternatively, from several polyproteins that are co-expressed, or a combination of single protein expression cassettes and one or several polyproteins, depending on the complex of choice. We recommend combining a maximum of four to five genes (in addition to the genes encoding for TEV protease and the fluorescent protein) into a single open reading frame (ORF). Otherwise, any later work to modify the genes of interest may become complicated.

We strongly recommend carrying out the design of polyproteins in silico using a DNA cloning software of choice (i.e., VectorNTI, ApE, others). Gene synthesis may be preferred for generating the individual genes of interest, in which internal BstEII and RsrII sites must be eliminated. If synthetic genes are used in conjunction with other plasmids of the MultiBac system, we recommend to further eliminate also any restriction sites that are part of the so-called multiplication modules (AvrII, ClaI, SpeI, BstZ17I, NruI, PmeI, BstXI) in the MultiBac plasmids [2, 3, 9]. Thereby, maximum flexibility of gene assembly is achieved for co-expressing proteins.

The modular concept of the MultiBac system allows transferring expression cassettes between various plasmids [2, 9]. This option can be used if several polyproteins are to be co-expressed, for example by inserting a polyprotein expression cassette into a Donor and accessing the LoxP site present on the MultiBac baculoviral backbone (Fig. 2b). Alternatively, Acceptor–Donor fusions can be generated by Cre-LoxP reaction of Donors of choice with pKL-PBac or pOmni-PBac, following published protocols [9, 10]. When co-expressing several polyproteins, we recommend using different fluorescent markers (CFP, YFP, mCherry, others) to monitor polyprotein expression instead of tagging each polyprotein with the same fluorescent protein.

All reagents are prepared using ultrapure water (Millipore Milli-Q system or equivalent; conductivity of 18.2 MΩ cm at 25 °C) and analytical grade reagents. Buffers, antibiotics, and enzymes are stored at −20 °C.

The genes encoding for the polyproteins are designed in silico, and then inserted into the transfer plasmid of choice. Once designed, polyprotein encoding genes can be created by a variety of means including DNA synthesis, restriction–ligation cloning, or sequence and ligation independent cloning (SLIC) [10, 11] or other methods, according to the preferences of the user. We recommend custom DNA synthesis to facilitate polyprotein construction.

The authors declare competing financial interests. IB is the author on patents and patent applications containing parts of the methods and reagents here described.