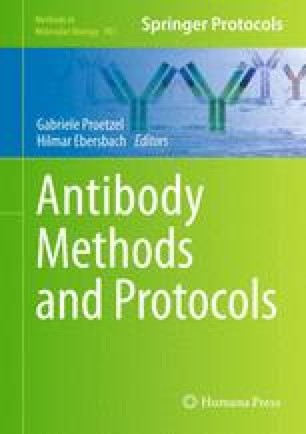 Immortalization of Human B Cells: Analysis of B Cell Repertoire and Production of Human Monoclonal Antibodies

One of the major challenges in human B cell immunology field has been the objective to establish stable monoclonal cells lines that express the B cell receptor (BCR) on their cell surface and secrete antibodies. Such a system is extremely attractive not only for studying various aspect of BCR signaling but also for the generation of human monoclonal antibody and the analysis of the human B cell repertoire. This chapter describes an efficient method to immortalize and clone human B cells by Epstein–Barr Virus (EBV) transformation.

In recent years, it has become evident that there is a great need to develop in vitro methods allowing to analyze human B cell responses in order to understand their regulation in normal as well as pathological situation such as autoimmune disorders, immunodeficiency, and infection diseases (1). One of the main limitations is that mature B cells, naïve as well as memory, cannot be maintained efficiently in vitro. When B cells are cultured in vitro in the presence of CD40 ligand (CD40L), cytokines, BCR triggering and Toll-like receptor (TLR) agonists they do respond. However, as soon as the B cells respond they differentiate into terminal plasma cells (2). This process is accompanied by cell cycle arrest precluding the generation of long-term B cell lines. Recently, transduction of peripheral memory B cells with the transcriptional factors involved in the control of B cell proliferation and differentiation, B cell lymphoma-extra large (BCL-xl) and BCL-6, respectively, has allowed to immortalize and generate stable cell lines expressing BCR and are able to synthesize and secrete immunoglobulins (3).

Several approaches have been developed to dissect and investigate the molecular regulation of the human B cell repertoire. One successful method has been to combine immunoglobulin (Ig) gene repertoire analysis and Ig reactivity at the single cell level (4). This strategy has been successfully applied for autoimmunity and immunodeficiency questions, and for the first time in human for central and peripheral B cell tolerance (5).

Among the oldest techniques to generate stable human B cell lines is the immortalization with EBV (6). In the past, one of the major limitations was the very low efficiency of B cell infection and subsequent cloning (7). Thus, alternative methods to produce human monoclonal antibodies have been developed, such as immunization of transgenic mice expressing human Ig loci, phage display library, and humanization of mouse antibodies via genetic engineering (8, 9, 10).

We recently described an improved method to infect and immortalize human B cells with EBV, in the presence of the TLR9 agonist, CpG 2006, during viral transformation and cloning (11). We have used this method to isolate neutralizing as well as non-neutralizing antibodies against severe acute respiratory syndrome coronavirus (SARS-CoV) (11). These antibodies have been generated from one individual, who recovered from SARS infection. The obtained antibodies display a high in vitro potency to neutralize viral replication. This approach is not only applicable to the area of infectious diseases but also other clinical conditions, such as autoimmune diseases and cancer, and allows exploiting the breadth and the avidity of the human B cell repertoire (12, 13). The method consists of four sequential steps: (a) human B cell subset isolation, (b) EBV infection, (c) B cell cloning, and (d) screening (Fig. 1).

2.1 Isolation of Human B Cells Subsets from PBMC

3.1 Isolation of Human B Cells Subsets from PBMC

The human peripheral B cell pool is composed of cells at different stage of development, characterized by different signal requirements to differentiate into immunoglobulin secreting cells and carrying different Ig isotypes on the cell surface: (a) immature transitional B cells, (b) naïve B cells, (c) IgM memory B cells, and (d) switch memory B cells (Fig. 2). EBV can transform all peripheral resting B cell subsets. To immortalize the desired human B cell subset immunomagnetic beads enrichment followed by cell sorting are sequentially applied for purification. Enriched B cells can be labeled with different combinations of monoclonal antibodies specific for surface antigens to identify and sort the B cell subpopulation of interest. A wide number of antibody combinations can be used and is summarized in Table 1.
Table 1

The screening strategy to select the “good” antibodies is a crucial part of the human antibody development. Humoral responses to vaccination or infection can be quantitatively but also qualitatively different. This reflects various level of protection in vivo, related to the differences in antibody function, which can be measured in vitro. All antibodies, which bind to a given antigen can be measured by enzyme-linked immunoabsorbent assay (ELISA). Alternatively, if the specific antigen can be expressed in the plasma membrane of a given cell line upon transfection of the relevant gene the binding of the antibody to the cell surface can be ­evaluated in flow cytometry. The ability to neutralize the specific pathogen in vitro is another possible measurement of antibody function.