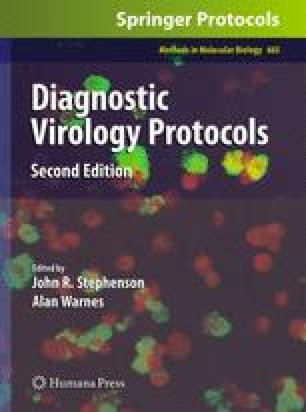 Rapid and accurate detection of respiratory syncytial virus (RSV) provides pathogen-specific diagnosis, allows implementation of appropriate infection control measures, and improves patient management. One diagnostic challenge is that respiratory infections, which can be caused by several viral pathogens including RSV, usually present with similar signs and symptoms that are nearly indistinguishable by clinical diagnosis. We have described in the chapter a rapid, high-throughput laboratory technique that can detect a panel of common viral pathogens in one single reaction. With the combination of target-enriched multiplexing PCR amplification and Luminex suspension array identification, 12 common respiratory viruses, including RSV A and B, influenza virus A and B, parainfluenza virus 1, 2, 3, and 4, human metapneumovirus, rhinoviruses, enteroviruses, and SARS coronavirus, are detected and differentiated simultaneously within five hours.

Respiratory syncytial virus (RSV) is known to be the leading cause of bronchiolitis and pneumonia in infants and young children (1, 2). Illness begins most frequently with rhinorrhea, sneezing, and cough. Most children experience recovery from illness after 8–15 days. During their first RSV infection, 25–40% of infected infants and young children have signs or symptoms of bronchio­litis or pneumonia, and 0.5–2% require hospitalization. There are high-risk groups prone to severe RSV disease that include premature infants, children with congenital heart and chronic lung diseases, and immunosuppressed patients or those with a congenital immunodeficiency, in which 25% require hospitalization (3, 4, 5). Infections with RSV of genotype A or B may result in differing clinical manifestations and outcomes (6, 7). RSV causes hazardous nosocomial infection and produces outbreaks each year with widespread infections in both children and adults, including medical personnel, who may have a mild enough illness that does not cause absences from work. Furthermore, the spread of the virus is facilitated by the number of young infants admitted during an outbreak who tend to shed high titers of virus for prolonged periods (8). Other viruses that can mimic RSV infection include adenoviruses, influenza virus (INF) A and B, parainfluenza viruses (PIV), human metapneumovirus (hMPV), and rhinoviruses. Patients with acute respiratory infections can present with similar signs and symptoms regardless of the viral pathogen, and clinical differential diagnosis of infections caused by these viruses can be difficult.

Early and accurate virus-specific laboratory diagnosis significantly enhances patient management. There are currently a variety of laboratory tests available to detect and differentiate respiratory viruses, which have been developed over the last two decades. The use of rapid tests in the diagnosis of RSV infection allows implementation of appropriate infection control measures, thus reducing nosocomial spread (9) and may be useful for consideration of timely treatment with aerosolized ribavirin in severe cases. Direct fluorescent antibody (DFA) tests have good sensitivity for RSV, but are not as good for other respiratory viruses (10, 11). Rapid EIA antigen tests are available for RSV and Influenza A and B; they are easy to perform, and more rapid than DFA, but have slightly lower sensitivity and specificity (12, 13). Among the respiratory viruses mentioned previously, the vast majority will be grown in traditional viral culture cell lines used in clinical virology laboratories with the exception of hMPV, which is not yet widely used in routine diagnostic laboratories (14). Furthermore, cell culture has a slow turnaround time with most viruses showing no detectable cytopathic effects until 3 to 14 days later. However, a shell vial technique incorporated with mixed fresh cells (R-Mix, Diagnostic Hybrids, Inc., Athens, OH) can be performed which speeds up the turnaround time to 2 days and has a sensitivity similar to conventional cell culture (15). The diagnosis of RSV infections using serology has no practical applications in clinical use.

1.3 Molecular Assays for Detection of RSV

As is the case with other respiratory viral pathogens, molecular assays based on in vitro nucleic acid amplification have been implemented gradually in clinical laboratories for RSV detection. These molecular assays, led by PCR, in general, have demonstrated to be superior to routine diagnostic methods in terms of their high sensitivity and specificity (16, 17, 18), which are especially useful in adult patients when viral shedding is short and low (19, 20). While cell culture remains the gold standard for RSV diagnosis, the molecular assays have been considered the “platinum” standard to be used as the reference to validate new diagnostic kits for RSV detection (2, 12). However, these organism-specific monoplex assays are resource-intensive; when a respiratory viral infection is considered, the list of possible etiologies is necessarily long. Multiplex RT-PCR-based techniques have widely been reported for simultaneous detection of a panel of respiratory viral pathogens in a single reaction (21, 22, 23, 24, 25). Several products, including the Hexaplex assay (Prodesse, Waukesha, WI), the PLx-RVP assay (EraGen Biosciences, Madison, WI), the ID-Tag RVP (TM Biosciences, Toronto, Canada), and the ResPlex II (Qiagen, Valencia, CA), are commercially available (22, 26, 27, 28, 29, 30). This chapter describes a complete molecular diagnostic procedure covering common RNA viral pathogens causing respiratory tract infections.

1.4 Simultaneous Detection and Differentiation of 12 Respiratory Viruses Including RSV

The following procedure consists of three components (Fig. 1). The first, specimen processing and nucleic acid extraction, is done by using an easyMAG automated total nucleic acid extraction instrument (bioMerieux, Durham, NC), based on a magnetic silica particle-based technique (31). The kits are available from bioMerieux and work on a variety of clinical specimens, including nasopharyngeal swabs and aspirates and yields high quantity and quality total nucleic acids (32). The second, nucleic acid amplification, uses a target-enriched multiplexing (TEM)-PCR (33), which contains two nested primer sets for each organism and a set of Super Primers, to simultaneously amplify INF-A, INF-B, PIV-1, PIV-2, PIV-3, PIV-4, RSV-A, RSV-B, hMPV, rhinoviruses (RhV), enteroviruses (EnV), and severe acute respiratory syndrome (SARS) coronavirus (CoV) gene in a single reaction tube (27, 29). The target gene from each of the viruses is listed in Table 1. The third, amplicon detection and identification, is reached by using a microsphere-based liquid array (Luminex, Austin, TX). A median fluorescence intensity (MFI) is reported for each target. A positivity cut-off is used to determine if the sample is positive for a particular target (34, 35). The last amplification and detection components are included in the ResPlex II kit, which is available from Qiagen.
Table 1

NOTE: Additional information can be obtained from the Generic Protocol provided with the easyMAG instrument.

3.3 Amplicon Detection and Differentiation by Luminex

Samples are analyzed on the LiquiChip 200 Workstation using QIAplex MDD Software. (Alternatively, the Luminex 100 IS System or Luminex 200 System with QIAplex MDD Software can be used). A mean fluorescence intensity (MFI) is reported for each target. Table 5 provides an example of data, from a ResPlex II run. The positivity cutoff is dependent on the instrument and software used for analysis. The cutoff value for each target is determined as the sum of the mean plus four times the standard deviations of the negative controls.
Table 5