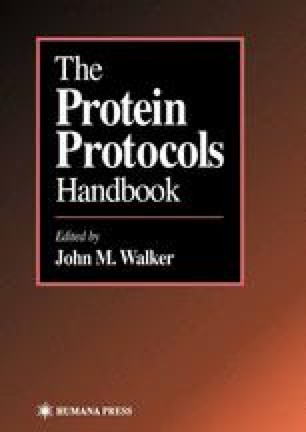 The Dansyl-Edman Method for Peptide Sequencing

The Edman degradation is a series of chemical reactions that sequentially removes N-terminal amino acids from a peptide or protein. The overall reaction sequence is shown in Fig. 1. In the first step (the coupling reaction) phenylisothocyanate (PITC) reacts with the N-terminal amino group of the peptide or protein. The sample is then dried and treated with an anhydrous acid (e.g., trifluoracetic acid), which results in cleavage of the peptide bond between the first and second amino acid. The N-terminal amino acids is therefore released as a derivative (the thiazolinone). The thiazolinone is extracted into an organic solvent, dried down, and then converted to the more stable phenylthiohydantoin (PTH) derivative (the conversion step). The PTH amino acid is then identified, normally by reverse-phase HPLC. This is known as the direct Edman degradation and is, for example, the method used in an automated sequencing machine. The dansyl-Edman method for peptide sequencing described here is based on the Edman degradation, but with the following modifications. Following the cleavage step the thiazolinone is extracted, but rather than being converted to the PTH derivative it is discarded. Instead, a small fraction (5%) of the remaining peptide is taken and the newly liberated N-terminal amino acid determined in this sample by the dansyl method (see Chapter 89). Although the dansyl-Edman method results in successively less peptide being present at each cycle of the Edman degradation, this loss of material is compensated for by the considerable sensitivity of the dansyl method for identifying N-terminal amino acids. The dansyl-Edman method described here was originally introduced by Hartley (1).

Lysine Residue Butyl Acetate Edman Degradation Lysine Side Chain Trifluoracetic Acid
These keywords were added by machine and not by the authors. This process is experimental and the keywords may be updated as the learning algorithm improves.
This is a preview of subscription content, log in to check access.