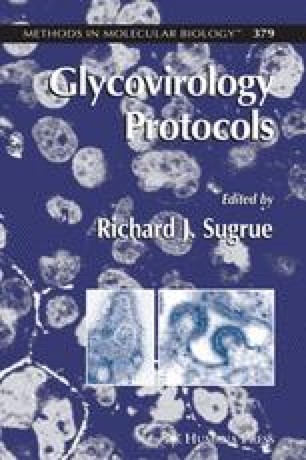 The Bac-to-Bac Baculovirus expression system was used to generate a recombinant baculovirus capable of expressing the severe acute respiratory syndrome (SARS)-coronavirus (CoV) 3a protein. Using the same expression system, two structural proteins, membrane (M) and envelope (E), were co-expressed to form SARS-CoV virus-like particles (VLPs) within an insect cell. Expression of viral proteins was confirmed by Western blot analysis and the formation of VLPs was studied by transmission electron microscopy.

Baculovirus expression systems are widely used to allow for the expression of recombinant proteins (1). The Bac-to-Bac Baculovirus expression system (2) is often preferred as it is a rapid system where purified recombinant baculo-viruses can be positively identified within 2 wk (3). The popularity of the system has further increased because the techniques used to isolate and purify the recombinant virus are relatively simple. A further advantage of insect cells is that they can fold, modify, traffic, and assemble newly synthesized polypeptides to form authentic, soluble end products (4, 5, 6). However, although the baculovirus-insect cell system has protein processing capabilities similar to those of higher eukaryotes, the insect protein processing pathways are not necessarily equivalent to those of higher eukaryotes (1). A good example of a similar but distinct processing pathway is the protein N-glycosylation pathway. Studies have shown that although insect cells could assemble N-glycans and transfer them to growing polypeptides, they have an unusual end-processing activity that trims an intermediate (common to both insect and mammalian pathways) to the insect-specific paucimannose end product (7). Nevertheless, baculovirus expression of viral proteins has been successfully used for the study of numerous viruses (1). This system has been particularly useful in the production of virus-like particles (VLPs) to study viral assembly processes and in several cases like the human papillomavirus and hepatitis C virus, such VLPs have been used in vaccine development (8,9). Another important application is the production of glycosylated viral antigens for immunization and protection against viral infection, for example, influenza A viral antigens expressed using baculovirus have been evaluated as potential vaccine candidates (10,11).

The recent severe acute respiratory syndrome (SARS) epidemic, which affected more than 30 countries across five continents, has profoundly disturbed social and economic activities globally. A novel coronavirus, termed the SARS-coronavirus (CoV), was identified as the etiological agent of SARS (12). The SARS-CoV genome is nearly 30 kb in length and contains 14 potential open reading frames (ORFs) (13,14). Five of these ORFs encode for genes that are homologous to proteins found in all known coronaviruses, namely the replicase gene 1a/1b and the four structural proteins, nucleocapsid, spike, membrane (M), and envelope (E), whereas the remaining nine ORFs encodes for accessory proteins, varying in length from 39 to 274 amino acids, which are unique to SARS-CoV. The largest of these accessory proteins is termed 3a (also known as U274, X1, or ORF3). Antibodies specific for 3a have been found in convalescent patients (15,16) and 3a has also shown to be expressed in SARS-CoV-infected cells (17, 18, 19). 3a is a novel coronavirus structural protein as it is associated with virion purified from SARS-CoV-infected cells and it is incorporated into VLPs when co-expressed with M and E in the baculovirus system (20,21). 3a is predicted to have three transmembrane domains (13,14) and when it is expressed on the cell surface, its N-terminus is facing the extracellular matrix whereas the C-terminus is facing the cytoplasm (19). It has also been reported that 3a is O-linked glycosylated, and this posttranslation modification may be important for its incorporation into virion (22,23). The formation of a recombinant baculovirus expressing the 3a protein fused with a myc-tag at the N-terminus will be used to illustrate the methods used to express this protein using the Bac-to-Bac Baculovirus expression system.

The formation of VLPs of SARS-CoV using recombinant baculovirus technology has been demonstrated (24,25). As has been observed for other coronaviruses, the co-expression of two of the SARS-CoV structural proteins, M and E, is sufficient for the formation of VLPs. The M protein is a triple-panning membrane glycoprotein that interacts with the nucleocapsid and spike protein during virion assembly (26). The small E protein has more recently been recognized as an essential structural component of the coronavirion. A large portion of this protein is embedded within the viral membrane; only its hydrophilic carboxy terminus protrudes inside the virion (27,28). Nal and co-workers recently showed that the SARS-CoV M protein is N-glycosylated, whereas the SARS-CoV E protein is not glycosylated (29). Recombinant viruses expressing M and E respectively will be used to form VLPs. The co-expression will be shown by Western blot analysis, and the formation of VLPs will be shown by transmission electron microscopy.

3.1 Generation of 3a Recombinant Virus

The vector utilised for this study, pFastBac1 ( Fig. 1. ), contains an expression cassette, which includes the Autographa californica multiple nuclear polyhedrosis virus (AcMNPV) polyhedrin (PH) promoter (30) (which allows for high level of expression in insect cells), a gentamicin resistance gene (for selection), and an SV40 polyadenylation signal to form a mini Tn7. This expression cassette is flanked by the right and left arms of Tn7. In the Bac-to-Bac Baculovirus expression system, recombinant bacmid DNA is formed using the site-specific transposition properties of the Tn7 transposon (32). Bacmid DNA (bMON14272) situated in E. coli DH10Bac cells, which allow for its propagation, contains the low-copy-number mini-F replicon, a kanamycin resistance marker, and lacZα from pUC. The attachment site for the bacterial transposition Tn7 (mini-attTn7) is inserted in the N-terminus of the lacZα peptide. When these cells are grown in the presence of X-gal and the inducer IPTG, blue colonies are formed, because the lacZα can complement a lacZ deletion present on the chromosome. The expression cassette present on the pFastBac1 (donor plasmid) is transposed to the mini-attTn7 attachment site on the bacmid with Tn7 transposition functions provided in trans by a helper plasmid (pMON7124). The insertion of the mini-Tn7 of the pFastBac1 vector into the mini-attTn7 attachment site of the bacmid disrupts the expression of the lacZα peptide. Therefore, colonies containing recombinant bacmids will remain white in the presence of X-gal and IPTG because the lacZα gene cannot express.

3.1.3 Transfecton of Insect Cells With Bacmid to Produce Recombinant Virus

3.2 Expression of the Recombinant Protein

The next step involved the confirmation of viral expression by Western blot analysis as outlined under Subheadings 3.2.1 – 3.2.2 . This includes infection of cells with the recombinant P2 viral stock, Sf9 cell lysis, SDS-PAGE, and Western Blot analysis.

3.3 The Co-Expression of Two Structural Proteins for VLP Formation

The procedures outlined under Subheadings 3.3.1. –3.3.3. describe how the recombinant viruses expressing M and E, respectively, were co-expressed within insect cells to form VLPs. These procedures include the co-infection of insect cells with M and E recombinant viruses, the expression of viral proteins by Western blot, and the purification of VLPs. The methods used to purify the VLPs were similar to that outlined in ref. 25.

3.3.1 Infection of Insect Cells With M and E Recombinant Viruses

3.4 Transmission Electron Staining and Visualization of the VLPs

Described as follows are the steps that can be used to stain and visualize the VLPs by transmission electron microscopy. These steps include negative staining and immunogold labelling. The immunogold procedure used was one modified from ref. 37.