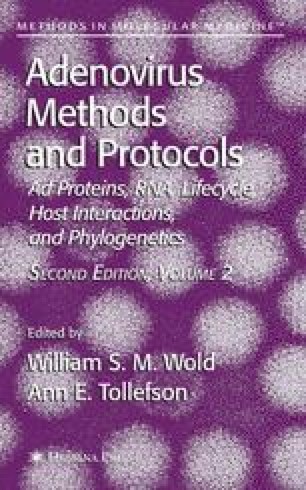 We describe a systematic, high-throughput approach to identify proteins involved in functional adenovirus (Ad)host interactions in vitro and in vivo. We were particularly interested in identifying cellular proteins that interact with fiber knob, which is the moiety within the Ad capsid responsible for high-affinity attachment of virus to cellular receptors. We used recombinant fiber knob domains from members of group C and B Ads to purify virus interacting proteins from cell membrane lysates and from human and mouse plasma. Using tandem mass spectrometry, we identified a number of candidate Ad-interacting proteins, including functional cellular receptors and previously unknown interacting partners such as complement component C4-binding protein and other blood proteins that presumably are involved in Ad infection after intravenous virus application. The ability of these proteins to bind to Ad was further confirmed using in vitro protein binding assays as well as infection competition assays. The approach of using a structural protein can be universally applied for a variety of viral and nonviral pathogens and can reveal host cell factors critical in viral infection, immune evasion, and tissue specificity. This information is also a prerequisite to assess in vivo safety and efficacy of Ad-based gene transfer vectors.

Pathogens, viral or otherwise, remain a major public health concern, accounting for high levels of morbidity and mortality throughout the world (1). Despite knowing the modes of transmission, clinical manifestations, and, in some cases, the entire genome of many of these pathogens, we still struggle to understand structures and mechanisms involved in pathogenhost interaction. For many emerging pathogens, such as the SARS virus, an important first goal is to identify how the virus chooses which cells to infect and what molecules facilitate this recognition (2, 3, 4). This information can provide insight into how the virus affects the host (through defined cellular signaling, for example) and can aid in the development of novel therapeutics against the virus.

The binding of a pathogen to its cellular receptor, however, is only one aspect of how a pathogen interacts with a host. For example, many pathogens travel via the bloodstream to their target tissues and while in transit can complex to one of many molecules in the blood that can serve to deliver the pathogen to a host tissue or even protect the pathogen from immune surveillance and subsequent destruction (5,6). Elucidating these pathways of infection is crucial for understanding the tropism of pathogens and developing therapies for infectious diseases.

It is becoming increasingly clear that knowledge of cellular receptors for Ad does not fully explain their tropism when applied systemically into hosts (16,17). After intravenous injection, CAR-interacting Ads can accumulate in liver macrophages despite the lack of functional receptors on these cells. Recent studies show that this process of liver infection is mediated by blood factors, and the identification of these proteins will be important in predicting and controlling Ad infection in vivo (18).

While it is clear that these hostpathogen interactions are important, there has not yet been a systematic, high-throughput way of identifying these interactions. Until now, investigators have relied on methods such as the yeast-two hybrid screening to identify interacting proteins. Although this method is powerful and can give insight into proteinprotein interactions, it has limitations stemming from the expression of mammalian proteins in a yeast system. For many proteins, mammalian-specific modifications are central to their biological function. Further, proteins often function in complexes with other proteins or in multimers, and this type of analysis is difficult in twohybrid systems. Other researchers have relied on scientific intuition, painstak ing biochemical analysis of a variety of proteins, or fortuitous discovery to identify candidate proteins (3,4,14).

Here we employed tandem mass spectrometry (MS/MS) to help facilitate identification of possible interactions of host proteins with Ad. We used Ad from serogroup C (type 5) and serogroup B (type 35) to identify interacting proteins. We first produced recombinant protein of the viral polypeptide of these Ads known to be important for host interactions. We then conjugated these proteins to agarose beads and used this complex to purify proteins from cellular membrane proteins or freshly isolated mouse plasma. The purified proteins were then analyzed using MS/MS to identify candidate proteins. Once these proteins were identified, additional assays were used to verify that proteins identified can truly interact with the viral polypeptide. We describe here techniques used to study the interaction between Ad serotype 5 or 35 fiber knobs and cell or plasma proteins. Similar studies can be performed with other serotypes and with other capsid proteins.

For the successful identification of proteins that interact with a known viral ligand, the following methods can be used to:

The methods used to produce recombinant viral proteins thought to be important for protein interactions is described elsewhere (19). We describe here the production of recombinant fiber knob. Briefly, the following steps are for producing adenoviral fiber knob domains with a 6-histidine tag at the N-terminus of the protein.

3.2 Conjugation of Viral Protein to Agarose

In order to identify proteins within mouse plasma that are capable of interacting with the Ad fiber knob domain, we isolated fresh mouse plasma according to the following protocol.

3.5 Precipitation of Interacting Proteins to a Viral Polypeptide

Once the viral protein has been conjugated to the agarose beads (see Subheading 3.3.), precipitation of proteins is done.

3.6 Isolation of Proteins From Complexes

Proteins bound to the Ad fiber knob domain are eluted from the complexes by one of two different techniques. For precipitations using the biotinylated fiber knob, protein complexes are disrupted by boiling. For those complexes formed using a 6-histidine tag, elution was done in the presence of 8 M urea to disrupt proteinprotein interactions. Each application is suited for specific situations (as discussed in Note 1 ).

Figure 2 shows a silver-stained SDS-PAGE separation of proteins from Subheading 3.6.2., step 1, along with identified proteins from MS/MS analysis.

To further determine if proteins found through the above process can in fact interact with the Ad fiber knob, several addition verification experiments were done. Using cell membrane proteins, CD46 was determined to be a candidate cellular receptor for group B Ads. Detailed experiments, including infection competition studies with soluble CD46 or reduction of infection with siRNA knockdown of receptor expression, verifying this finding can be found elsewhere (15). Further verification of interacting proteins from mouse serum was performed (18). In the first experiment, we used virus overlay protein blot assays to assess binding of purified proteins to Ad fiber knob domains. We then used one of the identified proteins, C4-binding protein (C4BP), in further analyses of binding to determine if it could compete for virus infection in vitro.

Chinese hamster ovary (CHO) cells are refractory to Ad infection; however, when stably transfected to express Ad attachment receptors, they become permissive for infection with the virus. While infection of CHO-CAR with Ad5 in the presence of physiological concentrations of C4BP and other plasma proteins did not demonstrate change in virus infectivity (data not shown), C4BP could efficiently compete infection of CHO-C2 cells (CHO cells expressing the C2 isoform of CD46) with an Ad35 fiber-containing vector (Ad5/35) ( Fig. 4A ) (23).

To analyze whether the infectivity of Ad can be modulated by interactions with plasma proteins identified through our approach, we infected human hepatocarcinoma cells, HepG2 (see Note 10 ), with an Ad5-based vector, Ad5*F (possessing a single point mutation abolishing its binding to its cellular receptor CAR [16,25]), in the presence of purified plasma proteins. This analysis revealed that when cells were infected with Ad5*F, few cells expressed the virus-encoded transgene GFP ( Fig. 4B, 0 μg/mL C4BP). However, when Ad5*F infection was conducted in the presence of C4BP, a marked increase in vector infectivity toward these cells was observed ( Fig. 4B, C4BP).

Here we demonstrate that using a straightforward high-throughput approach, novel functional interactions of a virus with host factors can be identified. Using Ad receptor-interacting fiber knob domain as bait, we recovered and identified a protein, C4BP, from whole mouse plasma that modulates virus infectivity toward both susceptible (CHO-C2 for Ad5/35) and resistant (HepG2 for Ad5*F) cell types. It should be noted that the other proteins identified through MS/MS analysis were confirmed to bind to Ad fiber knob domain in slot-blot assays, and future studies will determine the functional role of these interactions. Despite the complexity of mouse plasma protein composition, we were able to rapidly identify new Ad-interacting partners, which will have implications for Ad vector development. The approach of using a structural protein to identify host factors critical in viral infection, immune evasion, and tissue specificity can be universally applied for a variety of viral and nonviral pathogens and can reveal new targets for prospective therapies.