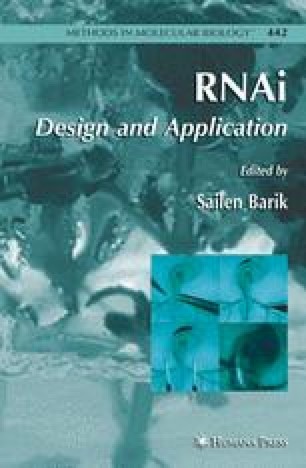 Application of siRNA Against SARS in the Rhesus Macaque Model

Containment of the SARS coronavirus (SCV) outbreak was accompanied by the rapid characterization of this new pathogen's genome sequence in 2003, encouraging the development of anti-SCV therapeutics using short interfering RNA (siRNA) inhibitors. A pair of siRNA duplexes identified as potent SCV inhibitors in vitro was evaluated for in vivo efficacy and safety in a rhesus macaque SARS model using intranasal administration with clinical viable delivery carrier in three dosing regimens. Observations of SCV-induced SARS-like symptoms, measurements of SCV RNA presence in the respiratory tract, microscopic inspections of lung histopathology, and immunohistochemistry sections from 21 tested macaques consistently demonstrated siRNA-mediated anti-SCV activity. The prophylactic and therapeutic efficacies resulted in relief of animals from SCV infection-induced fever, diminished SCV in upper airway and lung alveoli, and milder acute diffuse alveoli damage (DAD). The dosages of siRNA used, 10 to 40 mg/kg, did not show any sign of siRNA-induced toxicity. These results support that a clinical investigation of this anti-SARS siRNA therapeutic agent is warranted. The study also illustrates the capability of siRNA to enable a massive reduction in development time for novel targeted therapeutic agents. We detail a representative example of large-mammal siRNA use.

The outbreak of severe acute respiratory syndrome (SARS) posed an urgent need to understand disease pathogenesis (1, 2, 3) and biology of the causative agent, now identified as SARS coronavirus (SCV) (4, 5, 6, 7, 8). SARS patients usually develop a high fever followed by severe clinical symptoms including acute respiratory distress syndrome (ARDS) with diffuse alveolar damage (DAD) at autopsy (2,4,9). The containment of SARS was achieved largely through traditional quarantine and sanitation measures (9,10). Since SARS is a newly emerging disease and the first coronavirus-mediated disease, a safe and effective vaccine was not available, nor was an established anti-coronavirus therapeutic (11). Candidate vaccines became possible only once the causative virus was identified; efforts already have advanced to monkey models and clinical testing, spanning many approaches from attenuated and modified vaccinia virus, MVA (12), recombinant parainfluenza virus, BHPIV3 (13), inactivated whole virus (11), to DNA vaccines (14). However, these rapid advances require rigorous and lengthy studies (15), illustrating the difficulty in using vaccine development to offer rapid solutions for new emerging infectious diseases. To treat SARS patients, combinations of existing drugs have been developed including ribavirin, antibiotics, anti-inflammatory steroids, and immune stimulators, and this approach had achieved some clinical successes (16, 17, 18, 19, 20, 21). Many ongoing efforts to develop SARS-specific drugs such as screening of small molecule inhibitors and current biological approaches will clarify the strengths and weaknesses of each approach, based on the ultimate success rate, and the time and cost incurred.

The identification of SCV as the causative pathogen of SARS was critical for containment and patient management. This was achieved mainly by demonstration that exposure of cynomolgus macaques to SCV resulted in similar symptoms to those of SARS patients (1,2) while also creating the first animal disease model critical not only for understanding SARS pathogenesis but also for evaluating potential vaccines and novel therapeutics (13) and was followed by the development of several others (12,14,17,22).

Demonstration of protection by PEGylated interferon-α from SCV infection in cynomolgus macaques, as seen in SARS patients, gives further proof of the effectiveness of such model (21). Recently, a rhesus macaque model for SARS has been established with intranasal instillation of SCV strain PUMC01, showing many elements of pathology similar to those of SARS patients and the cynomologus macaque model (see Notes 1–3). The pathogeneses include elevated body temperature, low appetite, and acute DAD clearly visible at 7 days' post-infection (d.p.i.), but with somewhat worse severity (23, 24, 25, 26). Thus, it offers an ideal model for evaluation of therapeutic candidates inhibiting SCV specifically as potential treatments for SARS.

The search for developing antiviral agents directly from viral genome sequences has led to thorough investigations of siRNA (27,28). We previously screened 48 siRNA candidates targeting elements throughout the entire SCV genome and identified several active siRNA duplexes using fatal rhesus monkey kidney (FRhK-4) cells (29). Other active siRNA sequences inhibiting SCV have also been reported from screening only a handful of candidate open reading frames in cell culture with either synthetic siRNA (30, 31, 32) or plasmid-expressed shRNA (33). Translation from in vitro inhibition to efficacious use to treat clinical respiratory infections depends on clinically acceptable and effective administration. A pair of siRNAs showing prominent prophylactic and therapeutic activities in the cell culture study (29), referred to as siSC2 and siSC5, were further evaluated in vivo, first in mice using a reporter gene assay and subsequently using a clinically acceptable intranasal administration in the recently established rhesus macaque SARS model (23, 24, 25, 26). The study revealed strong evidence that these siRNA duplexes are potent prophylactic and therapeutic anti-SARS agents, and there is a lack of toxicity in the non-human primate model. These results further support the growing expectation that siRNA can fulfill the need for moving rapidly from gene sequence to selective inhibitory agents, and for many previously intractable therapeutic targets (see Notes 4 and 5).

We offer representative examples of our procedures and the corresponding results. We expect that readers will test their own targets and optimize the protocol accordingly.

For cost-saving purposes and to minimize handling of the pathogenic SCV, the mouse is first used to screen a large number of siRNAs against recombinant SCV targets before moving to the monkey.

Twenty rhesus monkeys belonging to five test groups were used in the study with same viral titer challenge but different drug dosing regiments of siRNA. Four monkeys were tested in each group and necropsied at either 7 or 20 d.p.i. in BL-3 environment. One additional monkey was used as no-viral-infection control, and the lung tissue was collected for the histology analysis