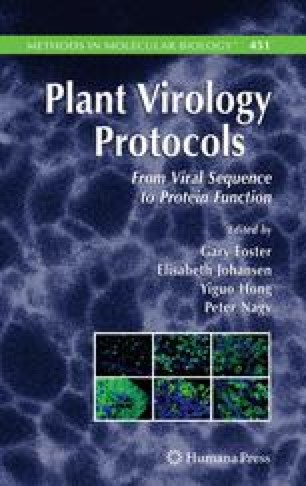 Plant RNA viruses exploit nonorthodox strategies, such as the use of internal ribosomal entry sites (IRES), to express multiple genes from a single RNA species. IRES elements have been reported in tobacco etch virus (TEV), crucifer infecting tobamovirus (crTMV), hibiscus chlorotic ringspot virus (HCRSV), and many other animal and plant RNA viruses. In this chapter, the methodology used to identify and characterize a plant virus IRES element, including construction of a translation reporter vector for testing the IRES activity, testing the IRES activity in coupled in vitro transcription and translation systems and mammalian cells analysis of RNA stability, and sucrose gradient analysis and polysome profiling, is presented.

In eukaryotes, translation initiation involves recruitment of 40S ribosomal sub units at either the 5′ m7G cap structure or internal ribosome entry sites (IRES). The ribosomal subunit together with other factors locates a start codon and protein synthesis begins following binding of the 60S ribosomal subunit, terminating at a stop codon (1, 2). To fully use their compact genomes, viruses have evolved various mechanisms either to redirect the translational machinery to favor viral transcripts or to regulate the expression of internal genes. Genome partitioning and the use of sgRNAs are common mechanisms used by many plant viruses to make their internal genes accessible for the ribosome (3). In addition, nonorthodox strategies such as the use of internal ribosomal entry sites (IRES) elements have been exploited by viruses to express multiple genes from a single RNA species. IRES elements are initially discovered in picornavirus RNAs to confer internal initiation independent of the 5′ end (4, 5). Since then, functional IRES elements have been reported in various viral and cellular messenger RNAs (mRNAs). Cellular mRNAs that contain IRES elements encode a wide variety of proteins such as translation initiation factors, transcription factors, oncogenes, homoeotic genes, and growth factors (6). IRES elements have also been reported in plant viruses such as Tobacco etch virus (TEV) (7) and Crucifer infecting tobamovirus (crTMV) (8, 9).

In Tobacco mosaic virus (TMV) U1, only the 5′ proximal gene of the gRNA is accessible to the ribosomes. An uncapped dicistronic sgRNAl directs the expression of only the MP, while a capped monocistronic sgRNA2 is responsible for the expression of the CP (10). The gRNA of crTMV is able to direct the synthesis of CP in vitro. A 148-nt region preceding the CP of crTMV was tested in a bicistronic construct to contain an IRES element with relatively short and simple structure (8). IRES elements identified in crTMV have been reported to be active in rabbit reticulocyte lysate system (8) and have recently been demonstrated to function in yeast and HeLa cells (11).

IRES elements, most well studied in picornaviruses, share common features that are responsible for activity. Most of the known viral IRESs are located in 5′ UTRs, highly structured and contain multiple conserved AUGs. Parts of the secondary structure of IRES elements associated with activity include sequences that form part of double-stranded regions (12, 13) or sequences located in apical or internal loops (14, 15). Disruptions of these regions have been associated with the modification of essential RNA-protein interactions (16). The GNRA tetraloop, an example of a conserved motif located at a distal loop in the central domain of Foot and mouth disease virus (FMDV) IRES, has been indicated to be involved in long range RNA interactions (14). Such RNA-RNA interactions, dependent on RNA concentration, ionic conditions, and temperature (17, 18), suggest dynamism in the tertiary structure of IRES that may play an important role in the IRES activity. Identification and characterization of a putative IRES element can be tested in wheat germ extract, rabbit reticulocyte lysate, and mammalian cells.

3.2 Transient Expression of Constructs in Cos-7 Cells

The integrity of mRNA derived from a test construct is analyzed by sucrose gradient analysis as described by Pelletier and Sonenberg (5).

3.8 Functionality of the IRES Element in Mammalian Cells

To test if the plant virus IRES element is functional in mammalian cells, the GFP gene is cloned upstream of the IRES region in a bicistronic construct.