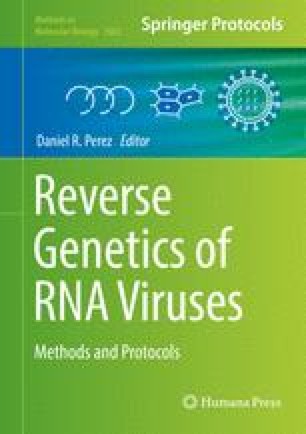 We have developed a reverse genetics system for the avian coronavirus infectious bronchitis virus (IBV) in which a full-length cDNA corresponding to the IBV genome is inserted into the vaccinia virus genome under the control of a T7 promoter sequence. Vaccinia virus as a vector for the full-length IBV cDNA has the advantage that modifications can be introduced into the IBV cDNA using homologous recombination, a method frequently used to insert and delete sequences from the vaccinia virus genome. Here, we describe the use of transient dominant selection as a method for introducing modifications into the IBV cDNA that has been successfully used for the substitution of specific nucleotides, deletion of genomic regions, and exchange of complete genes. Infectious recombinant IBVs are generated in situ following the transfection of vaccinia virus DNA, containing the modified IBV cDNA, into cells infected with a recombinant fowlpox virus expressing T7 DNA-dependant RNA polymerase.

The Coronaviridae form part of the order Nidovirales , which comprises two subfamilies, the Coronavirinae and Torovirinae. There are four genera of coronaviruses, alpha-, beta-, gamma-, and deltacoronaviruses [1], which were so named for their visual resemblance to the corona of the sun in negatively stained preparations [2]. Coronaviruses are enveloped viruses with a single-stranded positive-sense RNA genome of 26–32 kb, the largest genomes of all RNA viruses currently known, that replicate in the cytoplasm of infected cells. The genome associates with the nucleoprotein (N) forming a helical nucleocapsid within the virus particles. Although common among negative-sense RNA viruses, coronaviruses are the only positive-sense RNA viruses to possess helical nucleocapsids, which are enclosed within lipid envelopes containing the spike (S) glycoprotein, membrane (M) protein, and envelope (E) protein.

Avian infectious bronchitis virus (IBV) is a gammacoronavirus that is the etiological agent of infectious bronchitis (IB), an acute and highly contagious disease of poultry characterized by nasal discharge, snicking, tracheal ciliostasis, and rales [3]. IBV replicates primarily in the respiratory tract but also in many other epithelial surfaces including oviducts, enteric surfaces, and kidneys [4, 5, 6, 7]. Following infection with IBV, egg production and quality may be impaired in layers and weight gain in broilers is reduced [8]. Infected birds are predisposed to secondary bacterial infections such as colibacillosis and mortality in young chicks is not uncommon. Fecal excretion of the virus is a consequence of replication in the intestinal tract; however, this does not normally result in clinical disease.

Infectious bronchitis was first described in the USA in the 1930s [9, 10, 11] and is prevalent in poultry farming across the world due to the intensive nature of poultry production, estimated to involve the global production of 55 billion chickens (50 billion broilers and five billion layers) on an annual basis. According to a new market research report published by MarketsandMarkets, the global poultry meat market was worth $179,551.2 million in 2012 and is expected to reach $250,949.5 million by 2018. In a report, commissioned by Defra in 2005 [12], IBV was indicated as a major cause of ill health among chickens and was implicated as being responsible for more economic loss in the UK poultry industry than any other disease [13, 14]; IBV was estimated to cost the UK economy nearly £19 million per year, mainly due to loss of egg production, with serious implications for animal welfare. The cost of control through vaccination is approximately £5 million per year in the UK.

Coronaviruses are enveloped viruses that replicate in the cell cytoplasm. Coronavirus genomes consist of single-stranded positive-sense RNA, and are the largest of all the RNA viruses ranging from approximately 27–32 kb; the genome of IBV is 27.6 kb. Molecular analysis of the role of individual genes in the pathogenesis of RNA viruses has been advanced by the availability of full-length cDNAs, for the generation of infectious RNA transcripts that can replicate and result in infectious viruses. The assembly of full-length coronavirus cDNAs was hampered due to regions from the replicase gene being unstable in bacteria. We therefore devised a reverse genetics strategy for IBV involving the insertion of a full-length cDNA copy of the IBV genome, under the control of a T7 RNA promoter, into the vaccinia virus genome in place of the thymidine kinase (TK) gene. A hepatitis δ ribozyme (HδR) is located downstream of the coronavirus poly(A) tail followed by a T7 termination sequence. IBV infectious RNA is generated from the T7 promoter immediately adjacent to the 5′ end of the IBV cDNA using T7 RNA polymerase and terminates at the T7 termination sequence downstream of the HδR sequence, which autocleaves itself and the T7 termination sequence at the end of the poly(A) sequence, resulting in an authentic IBV genomic RNA copy. Infectious IBV is recovered in situ in cells both transfected with vaccinia virus DNA and infected with a recombinant fowlpox virus expressing T7 RNA polymerase [15].

One of the main advantages of using vaccinia virus as a vector for IBV cDNA is its ability to accept large quantities of foreign DNA without loss of integrity and stability [16]. A second and equally important advantage is the ability to modify the IBV cDNA within the vaccinia virus vector through transient dominant selection (TDS), a method taking advantage of recombinant events between homologous sequences [17, 18]. The TDS method relies on a three-step procedure. In the first step, the modified IBV cDNA is inserted into a plasmid containing a selective marker under the control of a vaccinia virus promoter. In our case we use a plasmid, pGPTNEB193 (Fig. 1; [19]), which contains a dominant selective marker gene, Escherichia coli guanine phosphoribosyltransferase (Ecogpt ; [20]), under the control of the vaccinia virus P7.5K early/late promoter.
In the second step, this complete plasmid sequence is integrated into the IBV sequence within the vaccinia virus genome (Fig. 2). This occurs as a result of a single crossover event involving homologous recombination between the IBV cDNA in the plasmid and the IBV cDNA sequence in the vaccinia virus genome. The resulting recombinant vaccinia viruses (rVV) are highly unstable due to the presence of duplicate sequences and are only maintained by the selective pressure of the Ecogpt gene, which confers resistance to mycophenolic acid (MPA) in the presence of xanthine and hypoxanthine [17]. In the third step, the MPA -resistant rVVs are grown in the absence of MPA selection, resulting in the loss of the Ecogpt gene due to a second single homologous recombination event between the duplicated sequences (Fig. 3). During this third step two recombination events can occur; one event will result in the generation of the original (unmodified) IBV sequence and the other in the generation of an IBV cDNA containing the desired modification (i.e., the modification within the plasmid sequence). In theory these two events will occur at equal frequency; however in practice this is not necessarily the case.
To recover infectious rIBVs from the rVV vector, rVV DNA is transfected into primary chick kidney (CK ) cells previously infected with a recombinant fowlpox virus expressing T7 RNA polymerase (rFPV-T7; [21]). In addition, a plasmid, pCi-Nuc [15, 22], expressing the IBV nucleoprotein (N), under the control of both the cytomegalovirus (CMV) RNA polymerase II promoter and the T7 RNA promoter, is co-transfected into the CK cells. Expression of T7 RNA polymerase in the presence of the IBV N protein and the rVV DNA, containing the full-length IBV cDNA under the control of a T7 promoter, results in the generation of infectious IBV RNA, which in turn results in the production of infectious rIBVs (Fig. 4). Primary CK cells are refractory for growth of most IBV isolates; therefore rIBVs expressing S glycoproteins from such isolates cannot be recovered using CK cells. In order to recover such rIBVs, the supernatants from the transfected CK cells are used to infect 10-day-old embryonated hen’s eggs. Allantoic fluid is collected and any potential virus passed a further three times in 10-day-old embryos. RNA is extracted from the allantoic fluid of infected eggs and RT-PCR followed by sequencing is used to confirm the identity of the rIBV.
The overall procedure is a multistep process which can be divided into two parts: the generation of an rVV containing the modified IBV cDNA (Fig. 5) and the recovery of infectious rIBV from the rVV vector (Fig. 4). The generation of the Ecogpt plasmids, based on pGPTNEB193, containing the modified IBV cDNA, is by standard E. coli cloning methods [23, 24] and is not described here. General methods for growing vaccinia virus have been published by Mackett et al. [25] and for using the TDS method for modifying the vaccinia virus genome by Smith [26].

2.7 Recovery of rIBV and Serial Passage on CK Cells

3.5 DNA Extraction from Small Stocks of Recombinant Vaccinia Virus for Screening by PCR

There are two methods for DNA extraction:

At this stage the extracted rVV DNA is analyzed by PCR and/or sequence analysis for the presence/absence of the Ecogpt gene and for the modifications within the IBV cDNA sequence. Once an rVV is identified that both has lost the Ecogpt gene and contains the desired IBV modification, large stocks are produced. Typically two rVVs will be taken forward at this stage, which ideally have been generated from different wells of the infection/transfection of Vero cells stage previously described in Subheading 3.1. Once the large stocks of the chosen rVVs have been produced, rVV DNA will be extracted and prepared for the recovery of rIBV.

3.11 Infection and Transfection of CK Cells for the Recovery of rIBV

To check for the presence of any recovered rIBVs the P0 CKC supernatant is passaged three times, P1–P3, in CK cells (Fig. 4b). At each passage the cells are checked for any IBV-associated CPE and for further confirmation RNA is extracted from P3 CKC supernatant and is analyzed by RT-PCR (see Note 12 ).