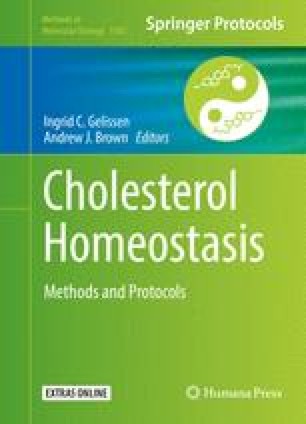 Cellular cholesterol homeostasis relies on precise control of the sterol content of organelle membranes. Obtaining insight into cholesterol trafficking pathways and kinetics by live-cell imaging relies on two conditions. First, one needs to develop suitable analogs that resemble cholesterol as closely as possible with respect to their biophysical and biochemical properties. Second, the cholesterol analogs should have good fluorescence properties. This interferes, however, often with the first requirement, such that the imaging instrumentation must be optimized to collect photons from suboptimal fluorophores, but good cholesterol mimics, such as the intrinsically fluorescent sterols, cholestatrienol (CTL) or dehydroergosterol (DHE). CTL differs from cholesterol only in having two additional double bonds in the ring system, which is why it is slightly fluorescent in the ultraviolet (UV). In the first part of this protocol, we describe how to synthesize and image CTL in living cells relative to caveolin, a structural component of caveolae. In the second part, we explain in detail how to perform time-lapse experiments of commercially available BODIPY-tagged cholesterol (TopFluor-cholesterol®; TF-Chol) in comparison to DHE. Finally, using two-photon time-lapse imaging data of TF-Chol, we demonstrate how to use our imaging toolbox SpatTrack for tracking sterol rich vesicles in living cells over time.

*These authors contributed equally to this work.

Dynamics of dehydroergosterol and TopFluor-cholesterol in CHO cells. CHO cells were co-labeled with DHE and TF-Chol, as described in the main text. Cells were washed, incubated in buffer medium for an additional 30 min at 37 °C and imaged on a UV-sensitive wide field microscope, as described in the main text. Cells were repeatedly imaged, first in the UV channel to follow the dynamics of DHE (left panel) followed by imaging in the green channel to follow TF-Chol (right panel), both at a 2 Hz acquisition rate. The grey-scale images were first normalized to keep the overall intensity constant . This is a crude correction for bleaching, which also amplifies noise for weak and decaying signals. Images were thereafter inverted for better visibility of small moving structures. Clearly, the DHE image is noisy and gets more noisy during the time lapse sequence, as the sterol bleaches for repeated acquisitions. The TF-Chol is much more photostable and allows for following the movement of small sterol-rich vesicles (AVI 1359 kb).