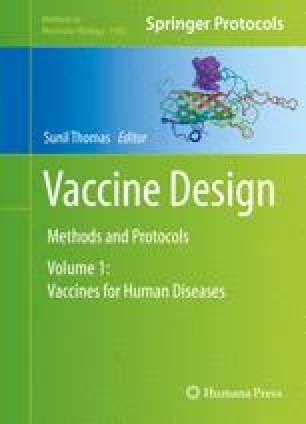 Given periodic outbreaks of fatal human infections caused by coronaviruses, development of an optimal coronavirus vaccine platform capable of rapid production is an ongoing priority. This chapter describes the use of an insect cell expression system for rapid production of a recombinant vaccine against severe acute respiratory syndrome coronavirus (SARS). Detailed methods are presented for expression, purification, and release testing of SARS recombinant spike protein antigen, followed by adjuvant formulation and animal testing. The methods herein described for rapid development of a highly protective SARS vaccine are equally suited to rapid development of vaccines against other fatal human coronavirus infections, e.g., the MERS coronavirus.

The severe acute respiratory syndrome coronavirus (SARS) was first identified in 2003 after a series of fatal pneumonia cases characterized by an inflammatory cell infiltrate with diffuse alveolar damage [1] started in Hong Kong before spreading to other countries [2]. Before being controlled by quarantine measures, ~8000 humans were infected, with fatality as high as 50 % in the elderly and an overall case fatality rate of ~10 % [2]. More recently, the Middle East respiratory syndrome coronavirus (MERS) has caused a series of serious and, in some cases, fatal human infections [3]. Given the risk of future serious human coronavirus outbreaks, development of a suitable vaccine platform to protect against such viruses is a major priority. These vaccines present several challenges including the rapidity with which these outbreaks develop and hence the need for rapid vaccine manufacture. Hence, a successful coronavirus vaccine platform must overcome multiple challenges.

SARS CoV is a positive-stranded RNA virus 29.7 kb in length with 14 open reading frames [4]. Initial SARS vaccine candidates were produced from inactivated virus. Inactivated whole-virus vaccines provided only modest protection, inducing low-neutralizing antibody titers that did not protect against infection but were associated with faster lung clearance of virus [5]. However, immunization of mice with inactivated vaccines either alone or formulated with alum adjuvant resulted in severe lung eosinophilic pathology in response to virus challenge [6, 7, 8, 9], similar to enhanced lung pathology seen with SARS virus reexposure after primary infection [10]. Hence a major challenge when developing a SARS vaccine is to identify strategies to avoid lung eosinophilic pathology.

A further challenge when developing vaccines based on inactivated SARS virus is the need for high-containment biosafety level 3 cGMP manufacturing facilities [11]. This makes vaccine manufacture more complex and expensive and restricts the number of vaccine doses that can be rapidly manufactured. To counter these challenges, it would be preferable to produce a subunit vaccine that just like inactivated virus was able to induce neutralizing antibodies against SARS-CoV, but rather than requiring BSL3 manufacture was able to be produced in a regular recombinant protein manufacturing environment.

The potential solution to this problem lies in the coronavirus spike protein (S protein), which in the case of SARS virus binds to angiotensin-converting enzyme 2 and CD209L and induces receptor-mediated virus endocytosis, thereby being critical to virus entry into target cells [12, 13]. S protein could thereby provide an ideal antigen with which to induce neutralizing antibodies against SARS virus [14, 15]. However, while immunization with S protein in animal models provided some protection against SARS virus [16, 17], S protein-immunized animals when subsequently challenged with live virus developed severe lung eosinophilic immunopathology, with this problem exacerbated even further when S protein vaccine was formulated with alum adjuvant [6, 9]. A similar problem of lung eosinophilic immunopathology has been seen with other viruses including respiratory syncytial virus (RSV) vaccines, which prime for an excessive and harmful Th2-dominated lung immune response upon subsequent virus exposure [18]. Lung eosinophilic immunopathology is exacerbated by formulation of such vaccines with any adjuvant that induces excess Th2 immune polarization, e.g., aluminum salt adjuvants [6, 9]. Hence, while S protein would appear to be an ideal SARS vaccine antigen, there is first the need to reduce the risk of lung eosinophilic immunopathology being induced by the vaccine.

Described below are methods used for the development and manufacture of a recombinant subunit vaccine based on an S protein antigen lacking transmembrane and cytoplasmic domains (S ΔTM) that was expressed using a baculovirus insect cell expression platform. As the S ΔTM protein antigen itself has low immunogenicity [16, 17], steps are also described for formulation with a safe and effective adjuvant [19]. As aluminum adjuvants are contraindicated for SARS vaccines given they may exacerbate lung eosinophilic pathology; instead methods are described for formulation of the S ΔTM protein with Advax™, a safe and effective adjuvant based on delta inulin [20, 21] that has been previously shown in animal models to enhance the immunogenicity of a broad range of viral and bacterial antigens [22, 23, 24, 25, 26, 27, 28, 29, 30] and has also been shown safe and effective in preliminary human clinical trials [31, 32]. Notably, Advax adjuvant was recently shown to enhance the immunogenicity and protection conferred by both inactivated and recombinant SARS vaccines, without the excess Th2 bias of alum adjuvants and hence without the risk of inducing lung eosinophilic immunopathology [33].

For this project a recombinant baculovirus was designed to express the ectodomain of the SARS S protein, lacking the transmembrane and cytoplasmic domains [17]. The recombinant protein expressed by this vector was termed SARS S ΔTM. This truncated version of the S protein was selected as it contains the receptor-binding domain (RBD) and was able to be expressed in insect cells at a higher level than the full-length membrane-bound version. The SARS S RBD has been shown to induce neutralizing antibodies against the SARS CoV [14, 15]. After infection of expresSF+® insect cells with the recombinant baculovirus, the S ΔTM protein is expressed and secreted into the cell culture medium [17]. The procedure detailed below for purifying the SARS S ΔTM protein can be followed after production of the protein in a baculovirus/insect cell system. The process is designed for a 45 L fermentation in a 60 L bioreactor but may be adjusted to other scales as necessary. Following harvest, the SARS S ΔTM protein is purified by column chromatography; a schematic is provided in Fig. 1. In the first step, the supernatant is flowed through linked UNOsphere S (UNO S) and DEAE sepharose columns. DNA and protein impurities are removed, and the SARS S ΔTM protein remains in the flow through. The flow through from the UNO S/DEAE step is applied to lentil lectin sepharose, SARS S ΔTM binds, and impurities are removed. Following elution from the lentil lectin sepharose column, the protein is concentrated, and buffer is exchanged by ultrafiltration. The retentate from the ultrafiltration step is processed through a 0.22 μm filter, and the purified protein is stored at −20 °C. Prior to intended use, the purified SARS S ΔTM protein is mixed under conditions with a suspension of Advax™ delta inulin adjuvant particles and either aseptically filled into single-dose vials or loaded directly into syringes ready for vaccination. Lastly, the adjuvanted SARS vaccine is tested for efficacy and safety in animal immunogenicity and SARS challenge models.