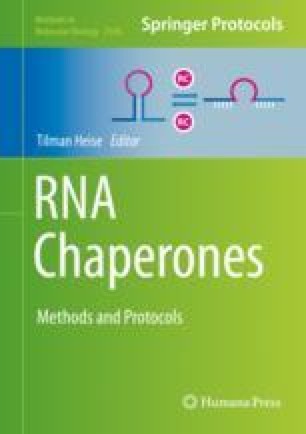 Molecular beacons (MBs) are oligonucleotide probes with a hairpin-like structure that are typically labelled at the 5′ and 3′ ends with a fluorophore and a quencher dye, respectively. The conformation of the MB acts as a switch for fluorescence emission. When the fluorophore is in close proximity to the quencher, fluorescence emission cannot be detected, meaning that the switch is in an OFF state. However, if the MB structure is modified, separating the fluorophore from the quencher, the switch turns ON allowing fluorescence emission. This property has been extensively used for a wide variety of applications including real-time PCR reactions, study of protein-DNA interactions, and identification of conformational changes in RNA structures. Here, we describe a protocol based on the MB technology to measure the RNA unfolding capacities of the CspA RNA chaperone from Staphylococcus aureus. This method, with slight variations, may also be applied for testing the activity of other RNA chaperones, RNA helicases, or ribonucleases.

Molecular beacons (MBs) are oligonucleotide probes commonly used to target DNA for real-time monitoring of polymerase chain reactions (RT-PCRs). The central nucleotides of the MB are complementary to a specific DNA (or RNA) target and do not base pair with one another, while the five to seven nucleotides at each terminus are complementary to each other, creating a hairpin-like conformation (Fig. 1a). Since the 5′ and 3′ ends are labelled with a fluorophore and a quencher, respectively, the MB acts as a switch. In their native conformation, the extremes are close enough for the quencher to prevent fluorescent emission from the fluorophore (switch OFF). When the MB hybridizes with its specific target, its native structure is disrupted, and both dye molecules fall apart from each other, allowing fluorescence emission (switch ON) (Fig. 1a). Since MBs tolerate very versatile designs, they have been used for various applications [1, 2]. Molecular biologists have taken advantage of their potential for studying different mechanisms such as protein-DNA interactions [3], single-stranded DNA cleavage by specific nucleases (Fig. 1b) [4], and structural changes on ribozymes and riboswitches (Fig. 1c) [5, 6]. In this last case, RNA conformational changes have been determined by the use of MBs that target specific RNA regions that become free for hybridization. This usually occurs after binding of the metabolite, which induces the subsequent RNA structural change on the ribozyme or riboswitch (Fig. 1c) [5, 6]. Thus, only when the MB is bound to its RNA target, the probe structure unfolds and becomes fluorescent. On the other hand, in order to study RNA chaperone activity, a more direct approach by using a MB that mimics the regulatory RNA hairpin targeted by a specific RNA-binding protein (RBP) has been adopted [7, 8]. This strategy assumes that binding of the RNA chaperone to the MB may cause a similar RNA conformational rearrangement to the one occurring on the native RNA. Therefore, the MB may act as a direct reporter of its own structural rearrangement (Fig. 1d). We choose this approach to demonstrate that the RNA chaperone CspA of Staphylococcus aureus unfolds the RNA hairpin present in the 5′UTR of its own mRNA [9] (Fig. 2a). This hairpin (ΔG = −24.60 kcal/mol) is cleaved by endoribonuclease III (RNase III) mainly at position G-53, generating a shorter cspA mRNA version that is more efficiently translated than the unprocessed mRNA [10]. CspA would repress its own expression by unfolding the hairpin and thus antagonize the function of RNase III [9].

Specifically, we designed a MB that comprised a 49-mer ssDNA oligonucleotide, which included the central functional sequence of the cspA 5′UTR hairpin (ΔG = −13.70 kcal/mol). A molecule of fluorescein (FAM) and a Black Hole Quencher (BHQ_1) were attached to the 5′ and 3′ ends, respectively (Fig. 2b). In the native MB conformation, BHQ_1 efficiently quenched the fluorescence from FAM, indicating that the designed MB accurately mimicked the cspA 5′UTR hairpin. In contrast, when the MB structure was disrupted (separating FAM from BHQ_1) either by the presence of the RNA chaperone CspA or by an increase in the temperature of incubation, fluorescence emission was registered. The folded conformation of the MB could be efficiently restored (indicated by the ceasing of fluorescence emission) either by adding Proteinase K, which eliminated the chaperone activity by degrading CspA, or by decreasing the temperature of incubation. The specificity of CspA on the designed MB system was verified by the incubation of the MB with an unrelated protein.

Here, we describe in detail the different steps that should be followed to determine the RNA folding rearrangements caused by the binding of any RBP by using a MB that mimics a natural target (whose synthesis could be ordered from a regular oligonucleotide supplier company). The protocol requires commonly available equipment at a molecular biology research center. It is noteworthy that, with slight modifications, this protocol may be adapted to test (1) any DNA or RNA folding structure that allows close proximity of BHQ_1 to FAM and that provides enough separation between them when disrupted; (2) the activity of RBPs such as RNA chaperones, RNA helicases and ribonucleases that target and/or process hairpin-like structures; and (3) the function of small regulatory RNAs that produce conformational changes on hairpin-like structures of their mRNA targets.

Prepare all solutions using ultrapure water (prepared by purifying deionized water to reach a sensitivity of at least 18 MΩ at 25 °C) and analytical grade reagents for use in molecular biology. Store solutions at room temperature unless stated otherwise. Follow safety and waste disposal regulations when handling harmful products accordingly.

2.2 Assessment of the RNA Chaperone Activity with a Molecular Beacon

3.1.3 Purification of the Recombinant CspA Protein

3.2 Assessment of the RNA Chaperone Activity with a Molecular Beacon

The success of this assay lies in an adequate MB design, which is based on two main principles: (1) the presence of an RNA structure targeted by the RNA chaperone under study and (2) fluorescence quenching exerted by a quencher dye (e.g., BHQ_1) on a fluorophore (e.g., FAM), which occurs when both molecules are in close proximity to one another. Additionally, the selected RNA structure must keep the quencher close enough to the fluorophore at the working temperature (switch OFF). MB mimicking hairpin-like structures have been shown to comply these criteria before [7, 8, 9]. Likewise, alternative MB conformations can be tested according to the characteristics of the protein of interest. Having decided the MB configuration, the synthesis of the labelled probe may be ordered to any oligonucleotide supplier (see Note 18). Based on the binding capacity of the CspA protein and the stability and cost of the probe, we decided to use single-stranded DNA instead of RNA oligonucleotides (see Note 19).

3.2.2 Testing the Effectiveness of the Designed MB and Setup of the Working Conditions

Before assessing if the RNA chaperone is able to unwind the MB structure, the effectiveness of the designed MB must be tested following two main criteria. On the one hand, no fluorescence emission should be detected when the MB is in an OFF state. On the other hand, maximum fluorescence levels should be registered when the MB is completely unfolded (ON state). In other words, a MB design will be appropriate when a large ON/OFF fluorescence ratio is detected. Incubating different MB concentrations at increasing temperatures (that denature the oligonucleotide and open the structure leading to FAM fluorescence emission) helps determining both the background fluorescence (see Note 20) and the lowest quantity of oligonucleotide needed to obtain good fluorescence levels when the MB is in an ON state (see Note 21). To test if the MB design was successful, proceed as follows:
Table 1

aVolumes of each reactive are indicated in μL

bSince the CspA protein is diluted in CspA storage buffer, the MB effectiveness test is performed including this buffer

3.2.3 Determination of the RNA Chaperone Activity Using the Designed MB

aVolumes of each reactive are indicated in μL

bReplicates of samples should be included

cIf the thermal cycler software allows it, the entire incubation protocol can be pre-programed including the corresponding PAUSE times

We thank Prof. Iñigo Lasa for critical reading of the manuscript. This work was supported by the European Research Council (ERC) under the European Union’s Horizon 2020 research and innovation program (Grant Agreement No. 646869) and the Spanish Ministry of Economy and Competitiveness (BFU2014-56698-P). C.J.C. was supported by a predoctoral contract from the Public University of Navarre (UPNA), Spain.