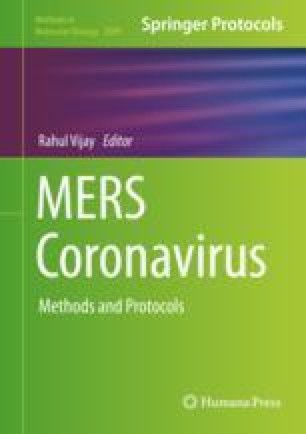 Pseudotyped viral particle production has been used extensively and broadly for many viruses to evaluate levels of neutralizing antibodies, viral entry inhibitors and vaccine immunogenicity. This assay is extremely safe and useful alternative to live virus-based assay without the need for high containment facilities. In this chapter, we describe the generation of MERS-CoV pseudotyped viral particles (MERSpp) expressing full-length spike protein using second-generation lentiviral packaging system. This platform is optimized to generate high titer of MERSpp and to test sera from different mammalian species.

Pseudotype viruses (also known as pseudoviruses, pseudoparticles, or pseudotype viral particles) were discovered in 1911 [1]. They are chimeric viral particles expressing recombinant glycoproteins from one virus on the surface of another replication-deficient virus (viral vector), generating a single round chimeric viral particles. Pseudotype viral particles have been developed for many viruses especially those requiring high containment facilities such as SARS-CoV, MERS-CoV, Ebola, and highly pathogenic influenza A viruses without the need to handle wild-type viruses [2]. Pseudotype-based assays allow for accurate, specific, and sensitive detection of neutralizing antibodies (nAbs) and screening for viral entry inhibitors.

The most efficient and common viral vectors for the production of pseudotype viral particles are lentiviruses. Lentiviral vectors are retroviruses, which are enveloped single-stranded RNA viruses, derived, for example, from human immunodeficiency virus type 1 (HIV-1). They have been used to develop pseudotype viral particles for many pathogenic viruses [3, 4, 5, 6]. These replication-deficient vectors offer a number of advantages including that they do not replicate in mammalian cells, they infect dividing and nondividing cells, they can incorporate large transgenes derived from other pathogenic viruses as large as 9 kb, and they induce no or weak immune response [7, 8, 9]. Several studies have utilized lentiviral vectors to generate MERS-CoV pseudotype viral particles (MERSpp) to evaluate nAbs in humans and animals. Here, we describe detailed protocol for the generation and utilization of MERSpp. This protocol is based on lentiviral system and use of luciferase enzyme as the main readout reporter of the system.

We would like to express our gratitude and thanks to Dr. Nigel Temperton and Dr. Keith Grehan for generating and providing the required plasmids for MERSpp. This work was supported by King Abdulaziz City for Science and Technology (KACST) through the MERS-CoV research grant program (number 09-1 and 34-01 to AMH and NKA, respectively), which is a part of the Targeted Research Program.