The Case for a Carbon Tax 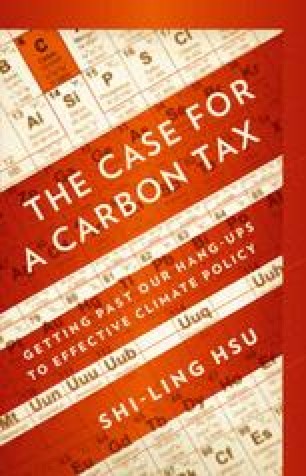 Global climate change has become the dominant environmental issue of our time. The “greenhouse effect,” or the trapping of heat from the sun as it bounces off the Earth’s surface, keeps heat within the Earth’s atmosphere instead of allowing it to radiate back into space. “Greenhouse gases” such as carbon dioxide trap this heat, and in fact play a vital role in regulating the Earth’s temperature. But this regulatory mechanism preserves a delicate balance, one that has been disturbed by the carbon dioxide emissions from the burning of fossil fuels. The Earth can only absorb so much carbon dioxide, it appears, and the excess emissions that have been accumulating since the onset of the Industrial Revolution have increased the Earth’s temperature, threatening to disrupt life for an entire planet that has gotten used to very specific climatic conditions.

Fossil Fuel Policy Instrument Address Climate Change Public Opinion Poll Reduce Carbon Dioxide Emission
These keywords were added by machine and not by the authors. This process is experimental and the keywords may be updated as the learning algorithm improves.
This is a preview of subscription content, log in to check access.