My Kind of City 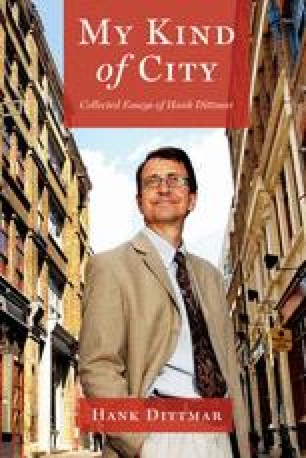 From Street Design by Victor Dover and John Massengale, 2014
Chapter

My favorite London street is actually the confluence of seven streets near London’s Covent Garden into a circular space called the Seven Dials. At the center of the Dials stands an obelisk with six sundials (not seven) donated by the Worshipful Company of Mercers—one of London’s guilds, and the owner of the area—in the 1690s.

But what involutions can compare with those of Seven Dials? Where is there such another maze of streets, courts, lanes, and alleys? . . . The stranger who finds himself in “The Dials” for the first time, and stands Belzoni-like, at the entrance of seven obscure passages, uncertain which to take, will see enough around him to keep his curiosity and attention awake for no inconsiderable time. From the irregular square into which he has plunged, the streets and courts dart in all directions, until they are lost in the unwholesome vapor which hangs over the house-tops.