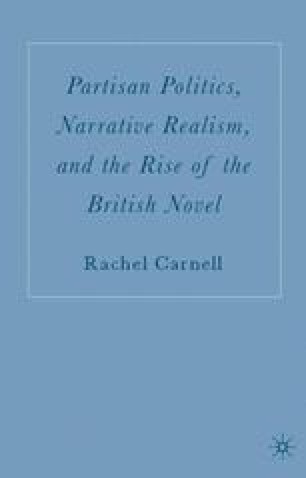 Partisan Politics, Narrative Realism, and the Rise of the British Novel pp 129-161 | Cite as

Although an immensely popular author in her own time and a remarkably inventive narrative stylist who helped shape novelistic writing throughout the eighteenth century,1 Eliza Haywood (c. 1693–1756) fell from favor in the nineteenth century, in part because her works were judged licentious.2 Her early twentiethcentury biographer only contributed to her fallen reputation by conflating the scandalous romances of her early writings with the story of her own life.3 The perception of her as a writer of licentious romance ultimately helped to define her as both apolitical and unimportant to the development of the “realistic” novel. In order to correct both of these common misapprehensions of Haywood’s work, I believe that we must understand the specific political discourses that shaped the Tory and Jacobite versions of realism that she authored.

Male Character Political Loyalty Narrative Persona Title Page Romance Convention
These keywords were added by machine and not by the authors. This process is experimental and the keywords may be updated as the learning algorithm improves.
This is a preview of subscription content, log in to check access.