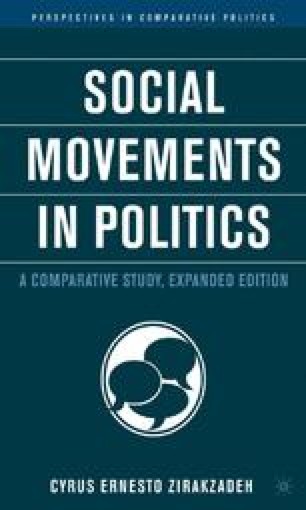 A World to Be Remade: Sociopolitical Circumstances of the Zapatista Army of National Liberation

Social-movement scholars in the 1950s and early 1960s typically argued that fast, unexpected, and extensive changes in a society can frustrate people to the point of joining and supporting movements for social reconstruction. Later scholars noted that political circumstances, especially intra-elite competition and the constitutional arrangements, can encourage the development of social movements by providing them with potential allies within the government as well as invaluable opportunities to organize and act in public.

Indigenous People Unused Land Partido Revolucionario Institucional Land Redistribution Social Reconstruction
These keywords were added by machine and not by the authors. This process is experimental and the keywords may be updated as the learning algorithm improves.
This is a preview of subscription content, log in to check access.

Cite this chapter as:
Zirakzadeh C.E. (2006) A World to Be Remade: Sociopolitical Circumstances of the Zapatista Army of National Liberation. In: Social Movements in Politics. Perspectives in Comparative Politics. Palgrave Macmillan, New York. https://doi.org/10.1057/9781403983336_11