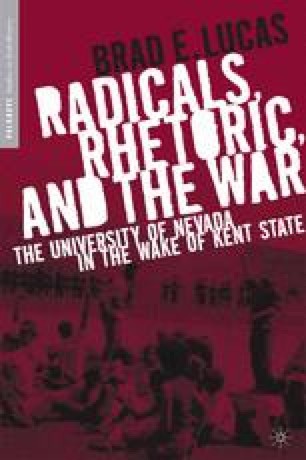 The January Deadline, the Adamian Affair, and Everything After

As we saw in the chapter four, the 1970 oral histories recorded impressions and inadvertent details that help us understand the complexity of Governor’s Day. First, information about the protest was not widely circulated. Not all observers understood that the Manzanita Bowl rally was just a starting point for the student-planned protest march, and not all protestors were aware that chairman Hug and professor Hulse had agreed that the marchers would circle the stadium, then exit. Second, faculty monitors attempted to guide the demonstration to minimize the threat of harm: moving students away from motorcade vehicles, keeping the track march orderly, working to regulate the flow of bodies into and out of the stadium bleachers, and, most importantly, preventing physical contact between student protestors and cadets. Third, the protest itself was a symbolic act, beginning with a merely threatening rhetoric of confrontation and then escalating into a very dangerous rhetoric of dissent. As a symbolic act, it failed to persuade officials to recognize Cambodia and Kent State, and instead prompted a counterreaction. Finally, the contributions of multiple leadership roles resulted in a chaotic mass action managed through ad hoc decisions. Rather than admit mistakes, university officials simply sought to displace their complicity in a dangerous situation. This chapter examines how this highly complex protest event, involving more than 300 demonstrators, came to be blamed on one man, a so-called radical professor named Paul Serop Adamian, whereas not one single other person was sought out for disciplinary action.

Faculty Member Black Student Student Activist Oral History Disciplinary Action
These keywords were added by machine and not by the authors. This process is experimental and the keywords may be updated as the learning algorithm improves.

When those first few people walked out of this bowl, I think we lost a lot of things on this campus that I think we could have kept. Now it’s going to be very, very difficult…. I was sure that we’d get a reaction that would make it almost impossible to go back where we were before that day.

As usual at the University of Nevada: Fear. Fear of the establishment, because this is an extremely conservative place. Fear of reprimand by their teachers…. I think it just got to them. Students were probably scared of being put in jail or not having any bail, fear that they don’t have a lawyer….