The Subversive Self in Modern Chinese Literature 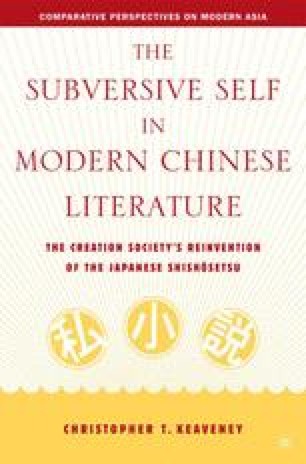 The members of the Creation Society, who were to play such vital roles in the construction of this new literature, were all young when the Society was formed in 1921, and the exuberance of their early writings was in keeping with the character of the age. Moreover, the most important of the founding members, including Guo Moruo (1892–1978), Yu Dafu (1896–1945), Zhang Ziping (1893–1959), and Cheng Fangwu (1897–1984), were all in Japan when the idea of forming a literary society was conceived. All four had been sent to Japan by the Chinese government in order to acquire practical skills, which they were expected to apply to the modernization of China upon their return. However, as with Lu Xun, Zhou Zuoren, and other writers who had preceded them to Japan as exchange students, the Creationists, in Japan during the former part of the Taishô period, came under the spell of nineteenth- and twentieth-century Western literature and decided to pursue the path of the literati (wenren)1

Chinese Writer Literary Society East Asian Society Modern Chinese Literature Young Writer
These keywords were added by machine and not by the authors. This process is experimental and the keywords may be updated as the learning algorithm improves.
This is a preview of subscription content, log in to check access.

Cite this chapter as:
Keaveney C.T. (2004) Shishôsetsu Theory in Japan and the Creation Society’s Encounter with the Form. In: The Subversive Self in Modern Chinese Literature. Comparative Perspectives on Modern Asia. Palgrave Macmillan, New York. https://doi.org/10.1057/9781403980984_2