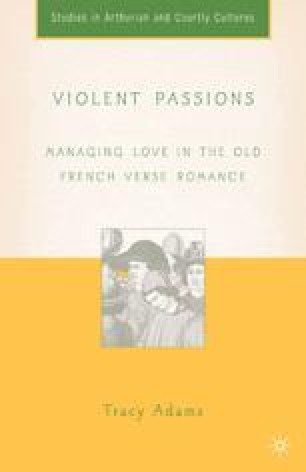 The Problem of Love

In The Knight, the Lady and the Priest, Georges Duby characterizes Lambert of Ardres, a cleric who chronicled the chivalrous and amorous adventures of his patrons in his History of the Counts of Guines, as a debunker of the popular literary conventions of courtly love. Although familiar with the romances of courtly love, in his account of the broken betrothal of Arnoul II of Guines in 1188 to the older, wealthier Ide, Countess of Boulogne, Lambert sets love “right in the middle of concrete reality.” Duby explains:

Ide had loved Arnoul, or at least “out of feminine frivolity and deceit” she had pretended to. Arnoul, for his part, had loved Ide, or at least “out of masculine prudence and cunning” had acted the part. In fact, “he aspired, by winning the countess’s favors through that genuine or simulated love, to the lands and dignity attached to the comté of Boulogne.”1

“[A]s we see quite clearly here,” Duby concludes,“amorous posturings were only the prelude to nuptial ceremonies, and beneath such displays were hidden the stern realities of dynastic politics.” For Lambert, courtly love is a duplicitous discourse that Arnoul had assimilated through reading courtly romances and then assumed to disguise his ulterior motives “out of masculine prudence and cunning”—or at least this is how Duby understands Lambert’s take on the matter. In another chapter of the same work Duby reinforces his notion of courtly love as deception, writing that contemporary sermons castigated noble youths, who, steeped in the literature of courtly love, pretended to “abase themselves before women, simulating mutual love and scandalously playing at serving ladies as they ought to serve only their lord .”2

Sexual Desire Sexual Relation Twelfth Century Parish Priest Courtly Love
These keywords were added by machine and not by the authors. This process is experimental and the keywords may be updated as the learning algorithm improves.
This is a preview of subscription content, log in to check access.