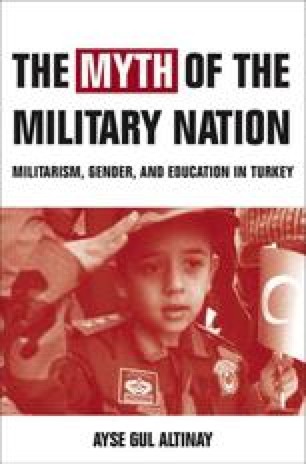 Silencing the Present: Student-Soldiers and Officer-Teachers Meet in the Classroom

An analysis of the high school military course solely based on its textbooks and teachers would be incomplete. To rephrase what Catherine Lutz and Jane Collins (1993, 217) have said about the magazine National Geographic, there would have been no military course without the millions of students who have taken it. Since Janice Radway’s (1984) paradigm-shifting ethnographic work on readers of romance novels in the United States, the issue of “reception” has been central in studies of cultural forms, products, and processes. The “tradition of the docile and imagined” audience (Lutz and Collins 1993, 218) has been replaced with an interest in the agency of the consumers of popular culture in interpreting cultural products in their own way. In this view, readers/viewers/consumers are not assumed to be passive recipients of the meanings intended by the producers of cultural texts, but they attach their own meaning to them. The question of whether possible meanings of a particular cultural form are infinite or whether they are limited by certain dominant themes constitutes a central concern of many cultural studies scholars today.

Prime Minister National Security Strategic Analysis General Staff History Textbook
These keywords were added by machine and not by the authors. This process is experimental and the keywords may be updated as the learning algorithm improves.

Silence itself—the things one declines to say, or is forbidden to name, the discretion that is required between different speakers—is less the absolute limit of discourse, the other side from which it is separated by a strict boundary, than an element that functions alongside the things said, with them and in relation to them within over-all strategies. There is no binary division to be made between what one says and what one does not say; we must try to determine the different ways of not saying such things, how those who can and those who cannot speak of them are distributed, which type of discourse is authorized, or which form of discretion is required in either case. There is not one but many silences, and they are an integral part of the strategies that underlie and permeate discourses.

You, the heroic young SOLDIERS of our sacred homeland, which the Turkish Armed Forces have defended and will continue to defend with success, make-up a real ARMY OF EDUCATION. The responsibility of the future has been placed on your shoulders, minds, and wrists.