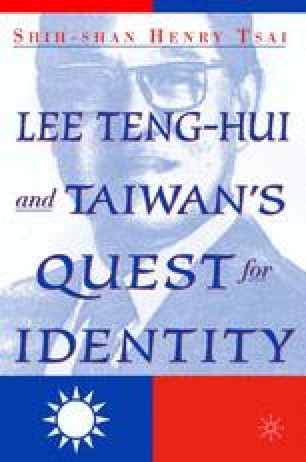 The beautiful island of Taiwan abounds with life that has been molded by unseen forces for over three centuries. As complex groups of immigrants evolved, Taiwanese society repeatedly experienced defeats—in such sorrowful years as 1642, 1683, 1895, and 1947. As a vanquished nation, Taiwan’s people responded in a variety of psychological, cultural and political forms. After each defeat, the spiritual and moral backbone of Taiwan was nearly crushed. Its people were forced to learn the language, the soul, the spirit, and the cultural identity of the victorious nations—from the Dutch, the Japanese, and the Chinese. Furthermore, the lack of social consensus and the disruption of political continuity added to the cultural problems of Taiwan.

International Civil Aviation Organization Political Tradition Taiwanese Society Colonial Master Japanese Colonial Rule
These keywords were added by machine and not by the authors. This process is experimental and the keywords may be updated as the learning algorithm improves.
This is a preview of subscription content, log in to check access.