The Martyrs of Columbine 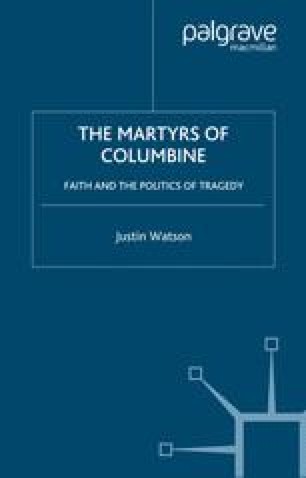 The day after the shooting, Rachel Scott’s car, a red Acura Legend, along with the Chevy truck of John Tomlin, a 16-year-old sophomore who died in the library, became impromptu shrines in a parking lot near Columbine High School—the foci of spontaneous outpourings of grief and sympathy. Like the Vietnam Veteran’s Memorial, the chainlink fence surrounding the bombing site in Oklahoma City, the gates of Kensington Palace during Princess Diana’s funeral, and Union Square after the destruction of the World Trade Towers, Rachel and John’s vehicles were soon laden with flowers, handwritten notes, stuffed toys, and all manner of personal mementos.1 Images of Columbine students, praying or weeping uncontrollably, touching or even collapsed upon the vehicles, appeared in newspapers and on television screens across the nation and around the world.2 Rachel’s car and Tomlin’s truck, along with the crosses set on a nearby hill, became part of the montage of grief, part of our jumbled collective memory of Columbine.

Tragic Death Biblical Passage Funeral Service Spiritual Awareness Mission Trip
These keywords were added by machine and not by the authors. This process is experimental and the keywords may be updated as the learning algorithm improves.
This is a preview of subscription content, log in to check access.