Structural Macroeconomic Change and the Size Pattern of Manufacturing Firms 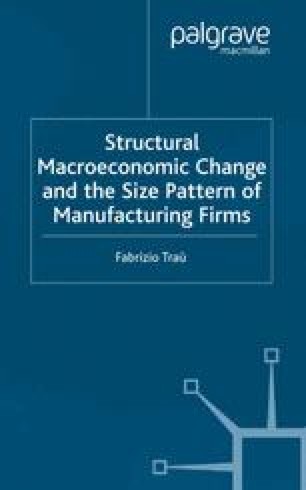 Empirical Analysis II: The Number of Business Units and their Average Size over the Long Run: Models of Industrial Development

4.1.1 The empirical evidence provided in chapter 3 shows that in the last quarter of the twentieth century industrialized countries witnessed a shift in manufacturing employment towards smaller business units. This took place — albeit to different extents — in almost all countries in relative terms, but it also coincided with shifts in absolute numbers in only two of the six countries included in the analysis — namely, Italy and Japan, that is the two ‘late comer’ industrial economies. This overall tendency represents a sharp reversal of the trend experienced by all countries since (at least) the end of the Second World War, which consisted of a constant growth of absolute employment levels in large firms (a development that is far less evident, as we have seen, as far as establishments are concerned). In (relatively) older industrial countries, then, changes in the shape of the business size distribution were basically driven by the downsizing of large firms, vis à vis a substantial stability in the number of employees in smaller ones. Such being the case, the observed shifts in overall employment mainly represent the outcome of the changing behaviour of larger units — that is, the reduction (at least in terms of the number of employees) in their average size.

Large Firm Industrial Development Business Unit Employment Change Firm Formation
These keywords were added by machine and not by the authors. This process is experimental and the keywords may be updated as the learning algorithm improves.
This is a preview of subscription content, log in to check access.

Cite this chapter as:
Traù F. (2003) Empirical Analysis II: The Number of Business Units and their Average Size over the Long Run: Models of Industrial Development. In: Structural Macroeconomic Change and the Size Pattern of Manufacturing Firms. Palgrave Macmillan, London. https://doi.org/10.1057/9781403943958_5