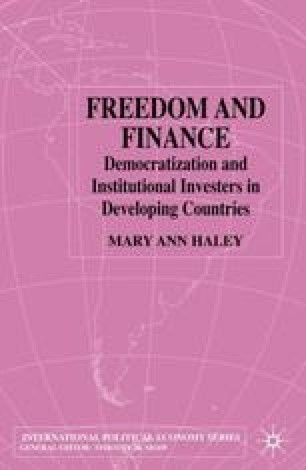 The 1994 Mexican peso devaluation and the 1997 Asian Crisis emphasized the power international financial globalization can have in developing countries. Many scholars as well as more mainstream ‘experts’ on financial globalization refer to this new power using abstract concepts such as the ‘market’ and ‘financial integration’. Scholars in economics and international political economy often refer to the phenomenon of ‘integration’ to describe the global processes that have increasingly inter-mingled emerging markets with the more mature, developed financial markets. (Garrett, 1998; Frieden, 1999) This ‘integration’ is often seen as the primary force behind emerging market successes and failures.1 Other scholars, such as Kingstone (1999), Stone (1999), and Unger (1999), refer to this power as ‘the market’ or ‘market forces’. Kingstone and Stone, for instance, see the ‘market’ as the enforcer of monetary and fiscal discipline for Brazil and Russia, respectively.2 More popularly, Thomas Friedman, Wall Street Journal columnist and author, describes this power as the ‘herd’ in his New York Times best-selling book, The Lexus and the Olive Tree (1999). Friedman emphasizes that the financial herd, or ‘short-horn cattle,’ is bigger and more diverse than ever before.

Mutual Fund Institutional Investor Pension Fund Fund Manager Capital Inflow
These keywords were added by machine and not by the authors. This process is experimental and the keywords may be updated as the learning algorithm improves.
This is a preview of subscription content, log in to check access.