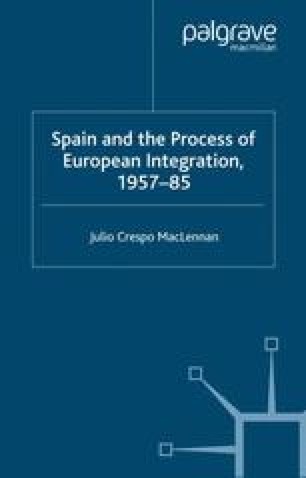 The Crisis of the Franco Regime in European Perspective, 1970–75

The Franco regime made a promising entry into the 1970s decade. There was no major challenge to its continuity and the signing of the preferential agreement had proved that it was possible to be partially integrated into the European Community without altering its political system. However, this optimism was soon to degenerate into disappointment and misgivings about the future of Spain in Europe.

European Community Trade Union Mediterranean Country Foreign Minister Death Sentence
These keywords were added by machine and not by the authors. This process is experimental and the keywords may be updated as the learning algorithm improves.
This is a preview of subscription content, log in to check access.