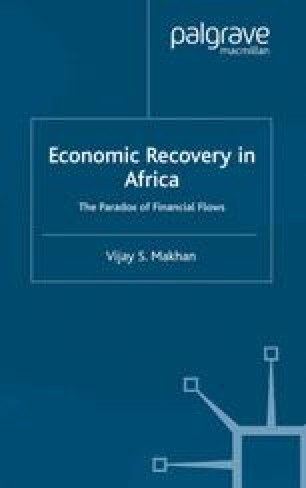 For most African countries, it is a profound paradox that at precisely the time when a conducive environment for growth was being established through the sacrifices of difficult political and economic reforms, levels of ODA flows were cut back sharply. As indicated in Chapter 1, notwithstanding the increasingly sound macroeconomic fundamentals in African countries, the recovery has not only been weak but also very precarious. The recovery was in fact due partly to improvement in policies, leading to more efficient resource allocation, and partly to the relatively strong performance of commodity prices in 1996–7. Strong investment performance, diversification and build-up of productive capacity have not driven the recovery. To this extent, the sustainability of the recovery in the face of Africa’s deep-rooted economic difficulties, population and related pressures is in doubt.

Civil Society African Country Economic Recovery Global Environmental Facility Global Poverty
These keywords were added by machine and not by the authors. This process is experimental and the keywords may be updated as the learning algorithm improves.
This is a preview of subscription content, log in to check access.