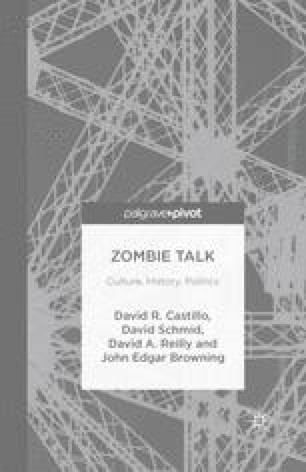 Zombie Masses: Monsters for the Age of Global Capitalism

This chapter re-examines the current zombie craze in the context of a discussion of modern monsters. From abnormal births to witches and vampires to today’s zombie masses, monsters have populated our imagination since the dawn of modernity. Going back to the late middle ages and the early modern period, monsters have been interpreted as both signs and warnings, in accordance with etymologies that traced the word “monster” to the Latin verbs monstrare (to show or reveal) and monere (to warn or admonish). Taking this notion as a point of departure, this chapter asks and seeks to answer the following questions: Why is it that our favorite monsters today are undead humans, i.e., vampires and, especially, zombies?

Global Capitalism Graphic Scene Early Modern Period Zombie Product Hybrid Creature
These keywords were added by machine and not by the authors. This process is experimental and the keywords may be updated as the learning algorithm improves.
This is a preview of subscription content, log in to check access.