Football and the Women’s World Cup: Organisation, Media and Fandom 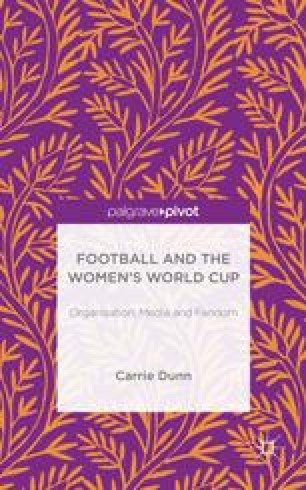 Football and the Women’s World Cup: Organisation, Media and Fandom pp 47-56 | Cite as

This chapter focuses on the responses of female fans of women’s football who highlighted a more political and implicit reason for their active support of the sport in general and at the Women’s World Cup 2015 more specifically. These respondents discussed their desire to support other women’s sporting achievement, and a smaller sub-section explained their interest in women’s football as an important part of their LGBTQ identity. This is, obviously, not to suggest that men do not support women’s football; previous and later chapters in this book show very clearly that men too are fans of the women’s game. However, the data gained in Canada does show some interesting and significant facets of women’s support of women’s sport, which are discussed here.

Media Coverage Female Athlete Compulsory Heterosexuality Queer Woman Male Football
These keywords were added by machine and not by the authors. This process is experimental and the keywords may be updated as the learning algorithm improves.
This is a preview of subscription content, log in to check access.