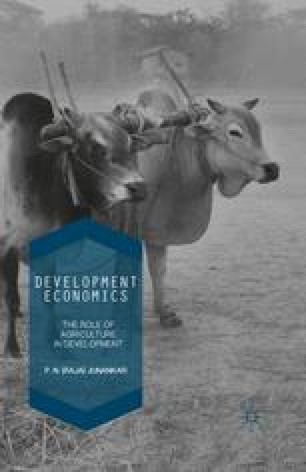 In a recent paper, Bardhan (1974) used Farm Management Studies data from four districts (Ferozepur in Punjab, Muzaffarnagar in UP, Hooghly in West Bengal, and Ahmednagar in Maharashtra) to compare income distribution in the mid-1950s with the distribution in the late 1960s. Using Farm Business Income, he finds that there is an unambiguous increase in inequality in Ahmednagar and an unambiguous decrease in inequality in Muzaffarnagar. For the other two districts, the Lorenz curves intersect and thus an evaluation of inequality requires explicit value judgments.1 However, using a Gini co-efficient (‘concentration ratio’), inequality of Farm Business Income has increased in all districts — except Muzaffarnagar. But, in contrast, using Gini co-efficients for Farm Size, he finds that inequality has increased marginally for Ferozepur and Ahmednagar, decreased marginally for Hooghly, and decreased for Muzaffarnagar. An interesting result is that, for all districts, the Gini co-efficient is higher for Farm Business Income (income inequality) than for Farm Size (wealth inequality). This latter result, he explains in terms of the economies of scale enjoyed by large farms.

Income Inequality Farm Size Lorenz Curve Green Revolution Large Farm
These keywords were added by machine and not by the authors. This process is experimental and the keywords may be updated as the learning algorithm improves.

An inevitable consequence of the Green Revolution has been increasing inequality in rural India. As the high-yielding varieties of crops require regular supply of irrigation and fairly large amounts of fertilisers, the advantage has been biased towards the large farms. These farms have also begun to substitute capital (e g, tractors) for labour. Since the new varieties are profitable there would be an increase in capitalist farming, an attempt by landlords to evict their tenants and cultivate the land with hired labour, and an attempt by large farmers to buy out small farmers as far as the land ceiling legislation will stretch.

In this paper the author presents some empirical evidence from the Ferozepur district of Punjab, to suggest that inequality is increasing in the agricultural sector. The question of the impact of the Green Revolution on employment and wages is not covered here. Empirical evidence on strictly ‘farm’ incomes and farm size as an index of wealth ownership is looked at.

The data used are from the Farm Management Studies for the Ferozepur district of Punjab, for 1968–69 and 1969–70. The approach is to trace, over the period, the changes in the distribution of farm size (wealth); to compare changes in the distribution of Farm Business Income over the period; and then to compare the income distribution with the wealth distribution. The data are for 150 farms chosen on a multi-stage stratified random basis. The advantage of this method of making a comparison over a short period is that changes in each farm can be identified. The disadvantage of this method is that there may not be very many changes in such a short time and, in any case, they may be random ones rather than systematic ones.

[I would like to thank the Nuffield Foundation for financial support; Alan J Harrison for his computer programme on inequality measures; Jill Smith and Rachel Britton for competent research assistance.]