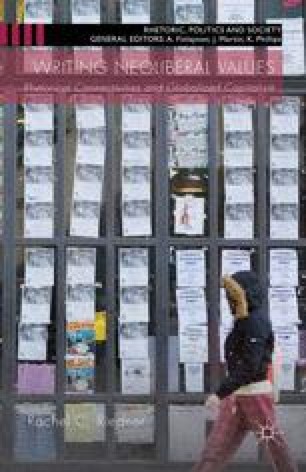 From Spectacle to Crisis of Feeling: Slow Violence, Affective Rhetoric, and the Case of Caster Semenya

In Twilight of Equality, Lisa Duggan observes that “… one of the most successful ruses of neoliberal dominance in both global and domestic affairs is the definition of economic policy as primarily a matter of neutral, technical expertise” (2004, xiv, italics added).1 In neoliberal rhetoric, economic expertise is seen as separate from political and cultural matters, not subject to political debate or cultural critique, and not worthy of affective narrative. It is a somewhat boring, technical expertise that is seen as the province of highly trained professionals.2 The propitious effect of this ruse for neoliberal political economics is to bracket off the monopoly of technical expertise on political economy from culture, politics, and public debate. This rhetorical separation of economics from politics and culture disguises neoliberal economic goals of upward redistribution that work through cultural categories. The consequences of this rhetorical separation are that cultural explanations are deployed as human-interest stories that are full of affect and emotion but that disavow the reality that political economic interests are imbedded in and at work in these narratives. In this context, gender, race, and other social markers can be categorized as individual or private, not linked to economic decisions or tied to productive systems (Duggan 2004, xiv).

News Story Previous Chapter Textual Detail Dominant Narrative Cultural Category
These keywords were added by machine and not by the authors. This process is experimental and the keywords may be updated as the learning algorithm improves.
This is a preview of subscription content, log in to check access.