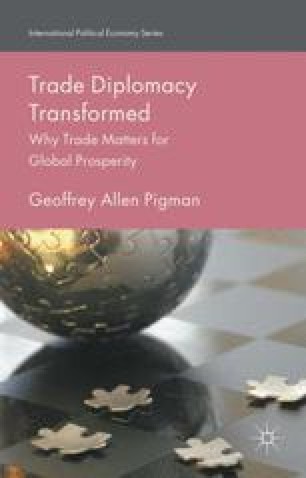 It is perhaps more than just coincidence that substantive change in the international trading system and in the European Union have both tended to be precipitated by crisis, or at least by public perceptions of crisis. In the second decade of the twenty-first century, international trade plays a more vital rôle in driving global economic growth and prosperity than ever. The real ratio of imports to GDP worldwide more than doubled from the mid-1970s to the mid-2000s, reaching nearly 30 percent by 2004, indicating more clearly than ever the growing importance of international trade to global economic growth.1 Hence in a period in which the global economic recovery from the severe 2008 recession has been slow and uneven, the need for increased global trade, and for the diplomacy that facilitates it, to stimulate global economic growth and to spread global prosperity more widely amongst all the citizenry of the globe has never been more pressing. The second decade of the twenty-first century, if not necessarily a time of crisis for international trade and economic growth, is at least a time of great uncertainty across many fronts.

Trade Policy Trade Liberalization Trading System Dispute Settlement Doha Round
These keywords were added by machine and not by the authors. This process is experimental and the keywords may be updated as the learning algorithm improves.
This is a preview of subscription content, log in to check access.