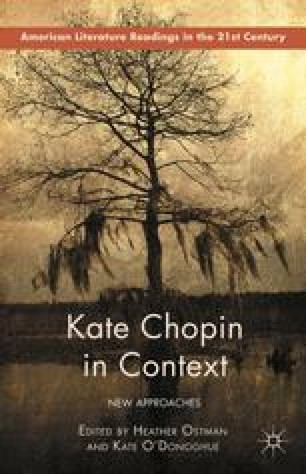 “I’m So Happy; It Frightens Me”: Female Genealogy in the Fiction of Kate Chopin and Pauline Hopkins

On the plantation, the lives of black and white women were intricately intertwined in a complex hierarchical system; they often had sexual relations with the same men,1 had children at the same time, and raised their children together. In this chapter, I explore the ways two women from different cultural and socioeconomic backgrounds express a shared identity. Kate Chopin’s short stories, “Désirée’s Baby” and “La Belle Zoraïde,” work in conversation with Pauline Hopkins’ sentimental novel, Contending Forces, to articulate a female-centered vision of the plantation south. Chopin and Hopkins experience a shared historical memory; each author reflects on the impact the plantation has had on the characters in her stories, and each author presents a new image of the changing plantation South. Pairing these texts can help students understand how Chopin’s fiction destabilizes the patriarchal order of the plantation South by linking the past and present, exposing the frequent sexual exploitation of black women, and by blurring binary understandings of gender, race, and class. Pauline Hopkins’s Contending Forces and Kate Chopin’s Bayou Folk were published only a few years apart—Bayou Folk in 1894 and Contending Forces in 1900. These texts tell stories of women, their children, and the relationships between them, but they are also stories about the plantation in American culture and its far-reaching implications.

Black Woman African American Woman Literary History Skin Tone Literary Woman
These keywords were added by machine and not by the authors. This process is experimental and the keywords may be updated as the learning algorithm improves.
This is a preview of subscription content, log in to check access.