Edward Said and the Question of Subjectivity 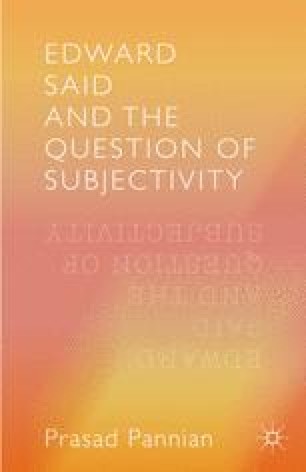 Politics of Exile, Act of Memory, and Recuperation of the Subject

The present chapter attempts to articulate the paradigm of exilic subjectivity as expressed in Edward Said’s various works and the politics that emerges out of its construction. As Said’s personal experience of exile is an integral element in the understanding and conceptualization of the collective exile of Palestinians, the chapter attempts to draw out his own sense of homelessness as a necessary prerequisite in perceiving his formulation of a new form of exilic subjectivity. Toward this purpose, his major works Last Sky, Place and Reflections are examined in this chapter. After briefly Reflections on the contemporary experience of being in exile, or out of place, have always been inextricably linked to the idea of modernity. Thinkers such as Nietzsche, Sartre, and Camus have extensively articulated the ontological and epistemological dimensions of being in exile. For Said as well, being in exile was both a literal and metaphoric condition in all its existential and epistemological sense. From the oeuvre of his academic work, it is clear that the persistence of the themes of rootlessness and reminiscence are represented not merely as an embodied state of affairs, but as an ethical and political condition. It is also clear that Said’s sense of home or homelessness, and the inventories of cultural locations where selves/identities/subjectivities are pronounced and articulated are ingrained in the actuality of Palestine and the Palestinian diaspora.

Critical Consciousness Peace Process Critical Practice Home Space Epistemological Dimension
These keywords were added by machine and not by the authors. This process is experimental and the keywords may be updated as the learning algorithm improves.

Every world he lived in, he inhabited fully and yet with an uncompromising critical distance. This is the great strength, the beauty, and the paradox of [Said’s] life

Said’s later work moved ever more decisively, though in inconsistent and untheorized ways, toward celebrating or emphasizing recuperation of the voices of the colonized, the anticolonialist, and the postcolonial

What is true of all exile is not that home and love of home are lost, but that loss is inherent in the very existence of both