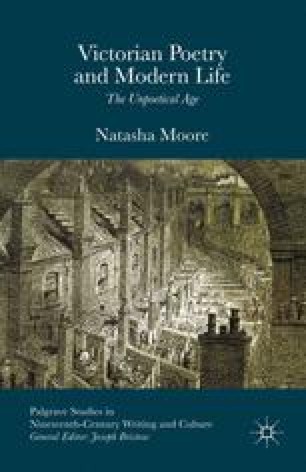 Although the long poem of modern life has been noted, under various names, in various contexts, no one really seems to know what happened to it.1 The mid-century proliferation of verse-novels, many with obtrusively contemporary subjects, slowed to a trickle sometime in the 1860s or early 1870s, and this dynamic, experimental, often ungainly or just plain mediocre, but almost invariably entertaining form ‘makes us wonder’, as Virginia Woolf remarked of Aurora Leigh, ‘why it has left no successors’.2 Over the sweep of the poems’ history, it has been customary to conclude that, even conceding the aesthetic merits and enduring appeal of the best of them, they were essentially failures; despite the prodigious skill and inventiveness many poets brought to bear on the problem, they could not entirely overcome the incongruity between form and content in the poetical treatment of modern, everyday life. Yet the critical dictum that no subject lies outside the realm of poetry — that ‘for the modern poet nothing is inherently unpoetic, simply because for the modern man nothing is inherently poetic’3 — is no longer controversial. What, then, happened in the meantime?

Modern Life Enduring Appeal Ordinary Life Adulatory Treatment Contemporary Subject
These keywords were added by machine and not by the authors. This process is experimental and the keywords may be updated as the learning algorithm improves.
This is a preview of subscription content, log in to check access.