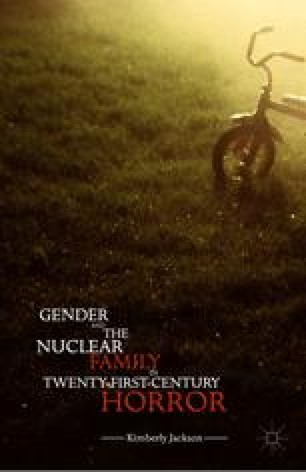 Like Son, Like Father: Tracing the Male Possession Narrative Through Shyamalan’s The Sixth Sense, Koepp’s Stir of Echoes, and Wan’s Insidious and Insidious: Chapter 2

Many post-9/11 horror films are particularly brutal in their portrayal of the fragmentation of the nuclear family and the larger patriarchal structure that it supports.1 In such films, patriarchs are often absent or violently dispatched, and a host of feminine figures and children are left to pick up the pieces. In this chapter, I examine four of these contemporary horror films in which fathers and sons function as mediums for vengeful ghosts: M. Night Shyamalan’s The Sixth Sense (1999), David Koepp’s Stir of Echoes (1999), and James Wan’s Insidious (2010) and Insidious: Chapter 2 (2013). The time gap between the first two films and the latter two is significant, as horror-film critics have identified certain shifts in the horror genre after 9/11 and the cultural anxieties the events of that day induced.2 All four of these films on the surface seem to champion the relationships between fathers and sons and thereby reinforce the patriarchal line. The first two films, however, suggest in the end that the next generation has seen too much to take on the mantle of the father. Particularly in The Sixth Sense, it is the child’s relationship to the mother that offers the possibility of a future free of the haunting presence of the dethroned patriarch and all of those who have suffered in his wake.

Absent Father Evil Spirit Paternal Line Father Figure Mother Figure
These keywords were added by machine and not by the authors. This process is experimental and the keywords may be updated as the learning algorithm improves.
This is a preview of subscription content, log in to check access.

Cite this chapter as:
Jackson K. (2016) Like Son, Like Father: Tracing the Male Possession Narrative Through Shyamalan’s The Sixth Sense, Koepp’s Stir of Echoes, and Wan’s Insidious and Insidious: Chapter 2. In: Gender and the Nuclear Family in Twenty-First-Century Horror. Palgrave Macmillan, New York. https://doi.org/10.1057/9781137532756_3