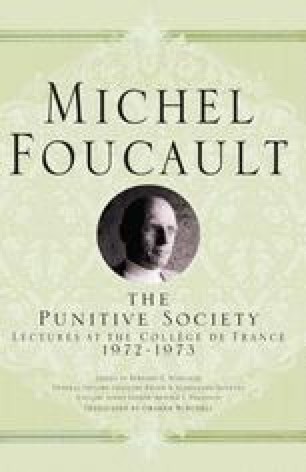 *WE HAVE SEEN THE establishment of a process of control [in England] made necessary by both the movement of individuals and the new system of location of wealth. We have seen that, as the nineteenth century approaches, the promoters of this control are no longer those religious groups of basically petit-bourgeois composition, but people connected to power: merchants, aristocrats. The target likewise changes: it is no longer marginal or irregular individuals so much as the class of workers, so that at the end of the eighteenth century we have a set-up which means that one social class exercises overall control over the other.†

Eighteenth Century Public Order State Apparatus Penal System General Surveillance
These keywords were added by machine and not by the authors. This process is experimental and the keywords may be updated as the learning algorithm improves.

(A) England (continued). The great rise of virtues. (B) France. Appearance of new techniques of removal and confinement. In France, investment of State apparatus by lateral social interest: lettres de cachet, a means of social control that produces moralization and psychologization of the penalty in the nineteenth century. Capillary counter-investment of associations, families, and corporations. ∽ Field of knowledge, biographical archives: influence of psychiatric, sociological, and criminological knowledge in the nineteenth century. ∽ Replacement of lettres de cachet by centralized State bodies: the big reformatories.