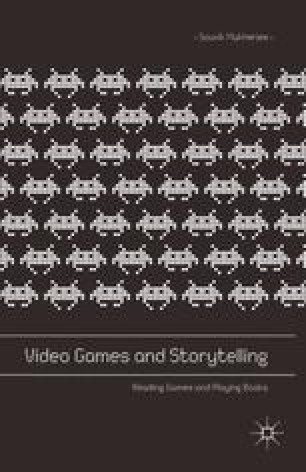 Ab(Sense) of an Ending: Telos and Time in Video Game Narratives

The plots of the video game narrative(s) are a great deal more complicated than the mesh of stories created in Calvino’s The Castle of Crossed Destinies. The structural constraints seen in the codex form are present in a lesser degree: unlike the apparently linear plots of earlier narrative media, the story-space in digital games is seemingly endless or multitelic. For some commentators, this poses major problems in conceiving of them as narratives. Often, unlike in older media, the game-text’s ending does not correspond to the spatial and the temporal limits of the game. Time operates in a complicated manner in the game-text and the replayability of the text gives rise to different narratives; yet, as any gamer knows, the ‘different’ narratives may be extremely repetitive with scarcely any variant feature to mark them out. A number of studies on ‘reading’ (or (w)reading) video games refer to their multiple endings as a unique feature but none attempt in-depth analysis. However, as this peculiar nature of the endings is a significant factor in compounding the problem with ‘reading’ digital game-texts as a narrative medium, a discussion of this is now long overdue.

Video Game Unit Operation Literary Criticism Game Design Digital Game
These keywords were added by machine and not by the authors. This process is experimental and the keywords may be updated as the learning algorithm improves.
This is a preview of subscription content, log in to check access.