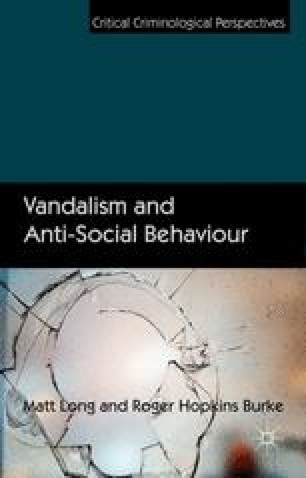 Cohen (1973: 44) originally used the term ‘vindictive vandalism’ to refer to ‘the use of property destruction as a form of revenge’, observing that those who commit such acts often consider that they have been unjustly treated and their actions can be seen, ‘as a form of spite, in order to get one’s own back or to settle a long term grudge’. Moreover, targets of vindictive vandalism often have a symbolic value which in many ways confirms our previous observations in Chapter 3. Times have nevertheless changed in the four decades since Cohen wrote and, whilst acknowledging that certain acts of vandalism do have a vindictive element, we have opted for the term ‘hate vandalism’. We feel that this latter notion rightly encapsulates the political nature (albeit regressive) of acts which are nowadays referred to as ‘hate crimes’.

Sexual Orientation Disable People Hate Crime Metropolitan Police Civil Partnership
These keywords were added by machine and not by the authors. This process is experimental and the keywords may be updated as the learning algorithm improves.
This is a preview of subscription content, log in to check access.