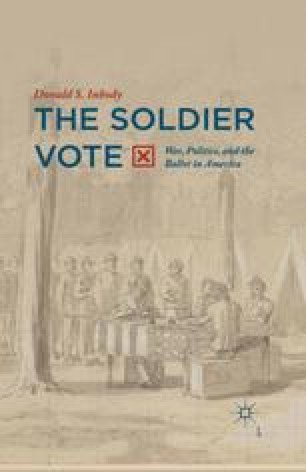 On Tuesday evening, October 11, 1864, twenty-two-year-old David McKelvy of Warren County, Pennsylvania, sat down at a small field desk in his tent to make an entry in his journal. For the past several days, he had been out among the soldiers of several Pennsylvania regiments. Not a soldier himself, he had been collecting votes for the upcoming Pennsylvania election of congressman and state legislators. After riding on horseback and in wagons on rough roads, as well as spending a considerable amount of time walking among the camps of the Pennsylvania regiments, he was tired. The weather had been wet and cold, and he had slept little during the previous few nights.2

State Legislature Republican Party Military Commission Proxy Vote Wayne County
These keywords were added by machine and not by the authors. This process is experimental and the keywords may be updated as the learning algorithm improves.

They have gone from among the sovereign people, intelligent freemen, constituent elements of the government, to contend for a cause in which they have a personal interest, and to maintain principles which, when the contest is finally closed, will affect them in common with all the rest, and are fully entitled to the privilege of exercising this right.