Ukraine Between the EU and Russia: The Integration Challenge 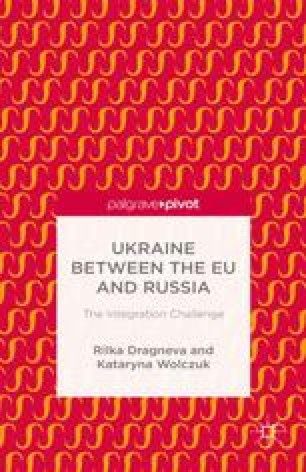 Ukraine Between the EU and Russia: The Integration Challenge pp 83-99 | Cite as

Yanukovych, the EU and Russia: The End of Balancing

By 2013, Ukraine was on the verge of signing an Association Agreement with the EU. Russia had failed to draw Ukraine into its integration regime despite its concerted campaign. Nonetheless, the economic mismanagement of Yanukovych’s regime — on top of 20 years of neglected reform and institutionalised rent-seeking — had left Ukraine bankrupt and hence extremely susceptible to external pressure. This chapter explains Yanukovych’s ‘twisting and turning’ as he sought to navigate between the two integration offers. His belief that he could balance the EU and Russia, and offer Ukraine to the highest bidder failed when the EU refused to engage in bargaining leaving him in the hands of Russia. In this chapter, we examine the terms of Yanukovych’s commitment to the Kremlin in return for its support and then discuss the popular backlash against his U-turn on the EU.