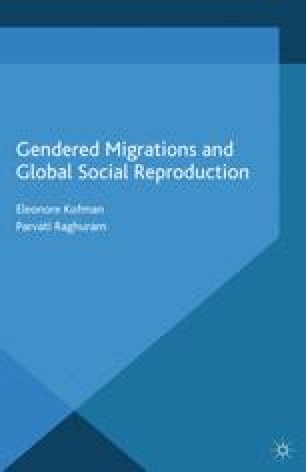 The growing interest in gendered migrations within a global system tended to focus on movements from the Global South to the Global North (Castles and Miller 1993; Morokvasic 1984; Phizacklea 1983). As migration came to be incorporated into analyses of globalisation and a significant dimension of Northern societies, so it increasingly connoted the international, thus instituting a clear demarcation between internal and international migrations and a corresponding division amongst the researchers who studied them. So too did a divide crystallise between those studying receiving and sending countries. The corollary of these divisions has meant that the multiplicity of migrations in the South was not seen as being shaped by and shaping an evolving globalisation.

Internal Migration Labour Migration Global Process Domestic Worker Migrant Woman
These keywords were added by machine and not by the authors. This process is experimental and the keywords may be updated as the learning algorithm improves.
This is a preview of subscription content, log in to check access.