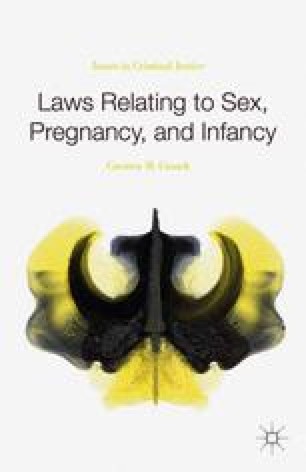 Historically, women’s criminal responsibility was considered in light of mental illness, which, in part, was attributable to menstruation, pregnancy, and childbirth (Kelly, 2009). Insanity and mental defect were considered to be similar to weakness in some cases (Meggendorfer, 1931). Explanations for criminal behavior were mainly biological. Heredity was used to explain why psychiatric treatment failed in some cases. Theories of social Darwinism explained that mental illness was proportionate to effective medicine. As medicine became more reliable, unfit genes were more likely to survive. Eugenicists believed that prescreenings prior to marriage for hereditary mental illness could improve breeding and consequently lower crime. Divorce reform was sought on behalf of individuals married to partners with mental defects. Birth control was also suggested for criminally insane individuals. Institutionalization, and resultant incapacitation, became a form of eugenic birth control for a period in history. Throughout the nineteenth and twentieth centuries, eugenically oriented sterilization was practiced. In 1965, a survey of administrators at 105 state mental hospitals and 48 schools for mentally retarded students found that illegitimate pregnancies within these populations occurred at one-fifth the rate of the general population (Wignall and Meredith, 1968).

Mental Illness Postpartum Depression Child Protective Service Young Father Postpartum Psychosis
These keywords were added by machine and not by the authors. This process is experimental and the keywords may be updated as the learning algorithm improves.
This is a preview of subscription content, log in to check access.